0
Yellup is a member of Mellow Yellow. Along with other team members, they hail from the City of Amalanta and met while working for The Non-Descript Soda Company before they quit the job, then they moved to Marblopolis and competed in Fruit Circuit before participating in the Marble League.

Yellup is also known for their relative excellency on Marbula One tracks as they managed to podium two times in Marbula One-styled events in the Marble League and have podiumed once in Marbula One Season 1. However, they are also notorious for falling off the track during qualifying at Aquamaring Grand Prix (S2), with Greg Woods' exclamation "Yellup is gone!" becoming a community meme, which is still widely referred to today.

Yellup, alongside other team members, they hail from the City of Amalanta. They met while working for The Non-Descript Soda Company before they quit the job, then they moved to Marblopolis and were asked to compete in Fruit Circuit, to which they accepted. They were improving in every season and they got 2nd in the final season of Fruit Circuit, which was enough to qualify for Marble League 2016.

The team started out well in Balancing where they got a silver but quickly fell down the order during the next two events, but only to be saved by Yelley's gold in Sand Rally which jumped them back to 1st in the standings. They then dropped to 3rd after Long Jump. The team had a slowdown in the next four events after Water Race, only earning one point and fell to 6th, but a gold in Diving brought them back into championship contenders with just one event left.

With just two points separating Mellow Yellow from standings leaders, the Thunderbolts, a strong finish in the final event, Hurdles, was important. Yellup was selected to take part, and they edged out Sublime of the Limers by 0.03 seconds to move on to the final. In the last race of Marble League 2016, Yellup built a solid lead early, but struggled over the last hurdles as Speedy of the Savage Speeders pushed through by less than 0.01 seconds to win the event and the overall title. Yellup's silver medal was Mellow Yellow's joint-record fifth medal of the games, and it was good enough to bring the team into a second place finish overall, pre-qualifying them for Marble League 2017.

The team pre-qualified for Marble League 2017 because of getting 2nd place in Marble League 2016. The team got off to a good start by placing 7th after the first quarter of the season (including Yellup's 4th-place-finish in Long Jump). Yellow then won 5-meter Sprint, jumping the team to 1st in the standings. The team then went on a downward spiral and scored only 13 points in the next three events, dropping to 8th in the standings. A gold in High Jump and their silver in Steeplechase elevated the team to 2nd in the standings, with 27 points behind the leader Savage Speeders. Terrible finishes in the last three events dropped them to 3rd, but it was enough for them to auto-qualify for Marble League 2018.

The team placed 2nd in the Friendly Round by placing 2nd in all three events, but their main tournament was a disaster for the team as they got seven bottom half finishes in the first eight events, including Yellup's 9th-place-finish in Ice Dash, ironically their second best finish in the first eight events. The team got three top-half finishes in the last four events, which was enough for the team to get out of the basement, but wasn't enough for the team to escape the bottom three and finished 15th to end this disastrous season.

Mellow Yellow had a busy offseason, returning to Amalanta to visit their families. There, they also began to work on a new stadium and training facility with their new coach, Mellow. They also had collected enough money to permanently settle in Amalanta. Yellup finished 15th in the 100 Meter Water Race and the team came last in their group in the Amazing Maze Marble Race. They also submitted a bid to host Marble League 2019, but lost out to the Oceanics.

The team participated in the qualifiers for the first time and got off to a terrible start as Yellup finished dead last in Funnel Endurance, but they barely qualified thanks to their 2nd-place-finish in Relay Race.

Mellow Yellow had one aim in Marble League 2019: to win back the respect of their fans after last year's poor performance. Unfortunately, Yellow placed 11th in Underwater Race. However, each event saw an improvement as the team moved up the standings. The team placed 8th in the standings after the first quarter of the main tournament. Yellow's win in 5 Meter Sprint jumped the team up to 6th in the standings. A bronze in Block Pushing pushed them up to 4th in the standings. Followed by that was three mid-pack finishes and two bottom-three finishes, which dropped them to 7th. Then the team was able to place top 9 in the rest four events and finished 4th in this tournament.

Mellow Yellow returned to Amalanta and were greeted with surprise as they saw their logo gratified around the city, their posters in their favorite pizza shop, and headlines about them in the Amalanta Press. The team once again applied for a hosting bid for Marble League 2020, but were again unsuccessful. However, they were invited to take part in Marbula One Season 1. They accepted the invitation and announced they would be sending Yellow and Yellup, who decided to use the nicknames "The Big Cheese" and "The Golden Boy", respectively.

Yellup got off to a strong start, qualifying at 8th in O'raceway GP and finishing in 7th, which was followed by a 5th-place-finish in Hivedrive GP, placing in 13th out of 40 competitors after the first half of the season, the team was placing in 10th out of 16 teams. Yellup continued their strong performances by getting pole in Greenstone GP and got a bronze in the main race, their first ever medal in this season. This jumped the team up to 6th. Yellup did not score any points in their last Grand Prix, and with Yellow's disappointing finishes, the team eventually finished in 10th.

The team got off to a great start by placing 4th in Balancing in the qualifiers, but disastrous performance in the Funnel Endurance was only enough for a 17th-place-finish and the team dropped to 13th. The team then placed top 7 in the next two events and were able to qualify in 5th.

However, it was again a horrible season as the team only got one top half finish in the first eight events, scoring only a total of 29 points despite getting one bronze. Yellup did horrible in their first two individual events, getting only 2 points. A bronze in High Jump shortened the gap between Mellow Yellow and the team in front with only 7 points, but they fell behind and was 8 points away from the Balls of Chaos with 8 points and Hornets with 10, and the rest of the teams with more than twenty points, it seemed unlikely for the team to jump out of the basement.

Yellup was sent to participate in the Marble Marathon and started first in the Placement Race because of placing 16th in the standings, Yellup finished 4th in Placement Race, but was able to take the lead on the very first lap. Yellup was in the lead for 9 laps before Wospy of the Midnight Wisps took it on lap 10, but was able to get it back. Another challenger was Minty Fresh from the Minty Maniacs and was able to take the lead on lap 16 but was taken back by Yellup in lap 18, Minty Fresh retook the lead on lap 20 and Yellup was never able to take it back, Red Eye from Crazy Cat's Eyes took 2nd place before Mellow Yellow managed to take 2nd place back in the final lap of the race, getting a silver. The team jumped up to 14th thanks to this silver. However, finishing 14th in this tournament is still far from satisfactory for a team that were in 4th last year

Yellow and Yellup were again chosen to participate in Marbula One Season 2 despite their awful season. Yellup failed to get off to a decent start by only placing 10th in O'raceway GP, Teammate Yellow did not score points in Honeydome GP. During Q1 of Aquamaring GP, Yellup was the last racer to run and fell off the track right after the ramp, placing dead last, fortunately, Yellup recovered quickly and was able to participate in Arctic Circuit GP and got 2 points. The team only got 13 points in the first half of the season and were sitting down in 18th in the standings, they're also the only team to qualify in bottom half in all six Grands Prix. To make matters worse, they were not invited into the Winter Marble League Special as well.

After a long season break, their awful qualifying record was changed when Yellow returned to Momotorway GP, where Yellow got the pole position and finished 3rd in the main race, earning the team's first and only medal in this season. This medal elevated the team to 13th. Yellup managed to get pole in Palette Park GP, making the team the first ever team to get pole in back-to-back Grands Prix, but this time Yellup wasn't able to repeat success and got only 13th. Despite scoring points in the rest three Grands Prix, the team could only salvage a total of 5 points in these three Grands Prix and ended the season in 15th. Yellup only finished 33rd in the individual standings.

The team was placed in Group A in Marble League 2021 Qualifiers and managed to win both team events which guaranteed the team a qualifying spot with one event left and team eventually qualified in 2nd.

The team started with a bronze in Wave but quickly fell down the standings to 14th because of two back-to-back 16th-place-finishes. A silver in Jousting brought them up to 9th but it was not before long that they fell to 11th again. The team then went on a podium streak, winning three consecutive medals and the team jumped into 1st in the standings with four events left. In Elimination Race, Mimo from Team Momo and Yellup got eliminated in Round 1 and Round 2 respectively, which enabled Raspberry Racers to retake the lead in the standings. Disappointing finishes in the next two events dropped the team to 3rd in the standings, with 2 behind Hazers and 9 behind Raspberry Racers. Marblocross started with reverse standing order, so Yellup started in 14th.

The team got off to a strong start, jumping up to 5th after two laps, and they jumped to 2nd in the live standings. But they weren't able to hold on and dropped all the way to 13th after lap 6, thus dropping to 4th in the live standings. Yellup was able to bounce back again, climbing up to 3rd in just three laps, regaining 1st in the live standings. They were able to pass the Green Ducks and took the lead on lap 13, extending the lead as the race continues, but the Minty Maniacs made the lead shrunk to 0.2 seconds on lap 20 and took the lead on lap 21. Mellow Yellow were never able to catch up and were passed by the O'rangers just before the finish line in the final lap, finishing in 3rd place. However, a 16th-place-finish by Hazy from the Hazers and a 15th-place-finish by Rizzy from the Raspberry Racers were able to crown the team the champion of Marble League 2021. 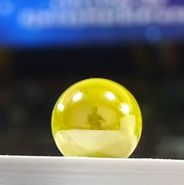 Yellup on the podium after their silver in Marble Marathon (2020) 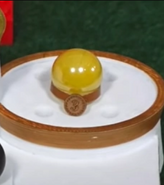 Yellup after their bronze in Marblocross (2021)
Community content is available under CC-BY-SA unless otherwise noted.
Advertisement