Blue with Yellow and Brown Stripes

Crush, Squirt, Shelly, Dash, and Frank are the original and current members of the team. Crush became team captain upon the team's formation.

The Turtle Sliders started their marble racing career in the Seven Seas Circuit, racing against other teams from Oceania such as the Oceanics. Shelly, the only original member of the team remaining, was key in helping the team outsmart their opponents and keep up with the Oceanics. Their skills in endurance, longevity and drive to compete kept them going in marble sports even as their old teammates retired. Unfortunately the Sliders never managed to beat the Oceanics, but came close in 2015 when they came third overall.

Once the Oceanics left to join the Marble League, many of the original members of the team lost interest and left the team. In mid-2018 Shelly traveled across the region to cities such as Aslipi, Jamarbla and Mellacai to recruit new members. In the end Shelly recruited Crush, Squirt, Dash, and Frank (the reserve member). Splint, the team's original coach, stayed on the team.

Crush was from Aslipi and used to compete in the Turtle Slider's minor league team, the Hatchling Skidders. After they retired from sports, they went into acting and appeared in a crime documentary produced by the Non-Descript Entertainment Company about colorful fish being kidnapped. They were convinced to join the Sliders by their younger sibling, Squirt, who had always looked up to Crush's leadership while they were in the Skidders. Frank followed them and became the reserve member.

Dash was recruited from Jamarbla. They were a rising star athlete in the city, known for their "extreme speed trials" that they would post on MarBook. They already had a huge fanbase and when they joined the Turtle Sliders, the fans followed. This large number of fans started to petition for the team to be allowed to compete in the Marble League 2019 Qualifiers. Splint, the original team's coach, was living in Mellacai when they were contacted about reforming the Turtle Sliders.[2]

The Turtle Sliders began training in Aslipi for the 2019 Seven Seas Circuit when they received news of the Marble League Showdown which featured a fan vote competition to determine two of the places. Their fans voted for the team in overwhelming numbers, using their previous previous rivalry with Oceanics to attract attention. This was their message to the team posted online:

"But we are coming for you, we will not stand in your shadow, we are here to take it all. Our goal is to make it to the Marble League and win it all, we made it this far, we aren't gonna stop now. We WILL make it to the starting line next to you, and when we do, you better be prepared. Your past is catching up to you."

Along with their past rivalry, their logo and reunion story were also praised. In the end they finished second in the vote behind the Hornets, and were entered into the Marble League Showdown 2019.

As the team trained, they focused on honing their synergy as a team. This paid off when they came 5th in Event 2, Collison. Unfortunately the other three events did not go as well. Squirt came 9th in Event 1, the Sand Rally, after struggling to reach the top 4 after getting caught behind a gaggle of competitors. Dash led for a lot of the Funnel Race but ended up consecutively falling through the final two funnels finishing in 10th and dropping them to 10th overall. The team had trained for the final event, Balancing, but their nerves got the better of them and they could only manage an 11th place finish, finishing in 11th overall, failing to qualify for the Marble League 2020 Qualifiers.[2]

The Sliders started to train at their training facility, Slider Academy. The academy was certified by the JMRC but was severely underequipped. Shelly started an athletic training program, although not all of the rest of the team had the time to take part.[3]

The Sliders started off Marble League Showdown 2020 by finishing just outside the top half in 7th in the Relay Run. This was followed by a less good 9th place finish in the Halfpipe. Dash and Shelly got the Sliders' only top half finish by coming sixth in the Black Hole Funnel. Despite this they dropped to 9th overall. Unfortunately Squirt could only manage an eighth place finish in the final event, the Sand Mogul Race, making the Sliders finish in 9th overall. Once again the Turtle Sliders failed to qualify for the Marble League 2021 Qualifiers. However, they would later be invited to participate in the qualifiers, following the retirements of the Hornets and the Jawbreakers.

During the offseason the Sliders were invited to take part in the Marble League 2021 Practice Race, where Crush participated in a sand race, finishing 13th out of 28 racers from all current Marble League teams. Crush finished ahead of Rapidly from the Savage Speeders, and so at the time the Sliders were the only team with a 100% win rate against the Speeders, as it was the first time they had ever competed together.

In the Marble League 2021 Qualifiers, the Turtle Sliders had a poor start in the Wave when one of the team got zero points and the other three placed behind every member of the Green Ducks. On their second run, they did even worse, with two of the team getting zero points and the other two placing behind all members of the Green Ducks. This left them in 11th place in Group B. In Event 2, Funnel Endurance, Dash was selected to compete. They fell down the funnels very quickly and were the fifth marble to enter the blue funnels. Dash recovered slightly and was in the middle of the pack going into the green funnels. Unfortunately, they could not hold on and finished in ninth, keeping the team in 11th overall. In the third event, the 5 Meter Relay, they competed in the first heat. They had a poor start but in the last handoff they edged into the lead for a split second but the Shining Swarm overtook them and won by 0.016 seconds. The Turtle Sliders ending up placing in fourth and this moved them to eighth in the overall standings. In the fourth and final event, the Sand Rally, Crush got into an early lead before hitting an obstacle on the track and falling to 11th. They sat in 11th for a while but slowly made their way up to eighth before making a charge up to fourth. They then got into second, behind the Pinkies. Near the end, the Pinkies hit the wall and slowed down, giving Crush an opening. Unfortunately they failed to take it and they finished in fourth. The Sliders finished in 10th overall, failing to qualify for Marble League 2021. They were only two points away from qualifying.

In the Marble League Showdown 2021, the team looked to be equaling their previous performances with a 10th and 8th place finish in the first two events. After a respectable 6th place finish in the 5 Meter Relay, the team got bronze in Block Pushing, their first ever podium. this was immediately followed up by a silver by Dash in the Triathlon, bringing the team up to 3rd place overall, the teams highest ever position in the Marble League Showdown. This was followed by another 6th place in Diving and the teams worst ever finish to date, a 12th in the Sand Mogul Race by Squirt. In the final event, Marblocross, Crush finished a respectable 5th, however it was not enough to prevent the sliders from finishing in the bottom half at 7th overall. Despite the disappointing ending to the showdown, the sliders had finished 2 places higher than any of their previous Showdowns. It is worth noting that if the old system of the showdown being a sort of qualifier for the Marble League Qualifiers, this would have been the first time the Sliders had made it to the Marble League Qualifiers.

The Turtle Sliders failed to qualify for the Marble League 2020 Qualifiers.

The Turtle Sliders failed to qualify for the Marble League 2021 Qualifiers.

The Turtle Sliders competed in Group B. They failed to qualify for Marble League 2021. 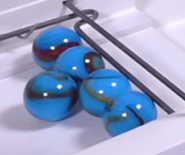 Crush, the captain of the Turtle Sliders.

Splint, the coach of the Turtle Sliders.