After the 2018 Marble League however, the original team dissolved out of a lack of passion for the sport, and the Thunderbolts were reconstructed with former trainers from Thorston. Since then, the Thunderbolts have been disappointing as they finished 13th in both the 2019 and 2020 Marble League.

Bolta, Bolto, Boltu and Bolty were the original members of the Thunderbolts. Boltew was introduced in 2018. In 2019, the entire Thunderbolts roster was replaced by five new members: Thunder, Lightning, Bolt, Shock and Zap. Thunder became team captain in 2019.

The Thunderbolts come from the city of Thorston, maybe in the north of Europe. Arguably the most mysterious of all Marble League teams, their striking name notwithstanding, the Thunderbolts aren't exactly the center of attention in the Marble League, nor do they ever wish to be. In fact, they have barely said anything, even during the offseason. This is especially true of the team's four original members, who are indeed all mute.

These four, Bolta, Bolto, Boltu, and Bolty, first met at a Greek mythology convention in 2012, all dressed up as Zeus. When they tried to communicate, they realized that none of them could speak at all. And so they started to speak to each other in roll language. During their discussion, the four found out that they had several things in common, including an affinity for racing. Once they left the convention, the four decided to form a marble sports team, and they already had a name for the team in their own minds: the Thunderbolts.

The Thunderbolts joined the Knikkegen Marble League later that year and rose through the ranks. The team became known as one of the fastest teams and, by 2016, had emerged as one of the top teams in the KML. This led to them being invited to take part in Marble League 2016. The team accepted the invitation, wishing to have the public know them not as the team that couldn't talk, but rather as the team that always shocked the competition.

The Thunderbolts started off unconvincingly in Marble League 2016, coming in 11th in the first event, Balancing. It was not before Event 2, Relay Race, where they finally won their first ever Marble League medal, a bronze. This was immediately followed by a gold in Event 3, Collision, putting the team into first place overall. Bolta earned the team a silver medal in Event 5, Long Jump, enough for the team to retake the lead in the standings.

The Thunderbolts proceeded to keep up with their brilliant performance, as proven with their bronze medal in Event 9, Team Pursuit, which made them take the lead once again. They remained there for the next two events until Bolto won the team another bronze medal in Event 12, Hurdles, narrowly missing out on a silver by 0.02 seconds. The team had been in the top two since Event 5, but their final bronze was not enough for them to keep their lead. They fell to third overall at the end of Marble League 2016, tied with Mellow Yellow on points, but behind them in medals. Such an achievement by the Thunderbolts showed that any marble can overcome adversity to shine on the podium.

The Thunderbolts remained silent during their training for Marble League 2017, for which they had already qualified thanks to their third place finish in the previous season. The team started off with an eighth place finish in the first event, Funnel Race, followed by a bronze medal for Bolty in the next event, Long Jump. The team rose to fifth overall as a result, and they had since become more motivated to do their best.

However, their surprisingly poor performance in Event 3, Fidget Spinner Collision, seemed to have foreshadowed the downfall of the Thunderbolts. Indeed, the team continued to struggle as they finished within the bottom half in the next six events, except Event 6, Relay Run, where they managed to finish in 7th after being eliminated in the semi-finals. By the end of Event 9, Steeplechase, they had dropped to 14th overall and were no longer eligible for the Marble League title.

The Thunderbolts decided to make amendments following their failing streak. It worked, and the team won a bronze medal in Event 10, Archery, and Bolta won another in Event 12, Sand Rally. Unfortunately, they couldn't jump up the standings any further, finishing in 12th overall. It was a far cry from their incredible top three finish last year, but the team were still grateful to have taken part.

After another silent offseason, the Thunderbolts returned for the Marble League 2018 Qualifiers, where they would compete in Group C. Following in the steps from the previous season, the team were eliminated in the first round of the first event, Curling. However, they managed to make up for it by finishing the next three events within the top half, including a third place finish for Bolta in the Snow Race event and a first place finish in the Halfpipe event, the latter of which put them into third place in the group, enough to qualify for Marble League 2018.

The Thunderbolts had a poor start to the competition, with Boltu coming in 15th in Event 1, 5 Meter Ice Dash. But a fifth place finish for Bolto in Ski Jump and a fourth place finish in Halfpipe reignited their hope. They won their first gold medal of the games in the next event, Bobsled, moving to second overall. The team went on to stay in the top half of the standings for most of the rest of the season, partly due to a bronze medal in Event 8, Snowboard Cross, and another in Event 10, Biathlon. However, they faltered in the final two events, and they fell to 9th at the end of Marble League 2018.

During the offseason, the Thunderbolts continued to falter in the events they took part in. Bolto failed to finish in the 100 Meter Water Race, and the team failed to get through the heats in the Amazing Maze Marble Race. It became clear that the original four members, as well as their reserve, Boltew, had had enough. Their hearts were not in the Marble League anymore, and they wanted to live life again, and so retired.

With these retirements, it looked like the Thunderbolts would retire from the Marble League as a result. The team's coach and manager, Thunderstorm, had another thought. They recruited five of their trainers from Thorston - Thunder, Lightning, Bolt, Shock, and Zap, to become the new members of the Thunderbolts. Bolt is Bolty's cousin, while Lightning had previously competed individually in the Knikkegen Marble League.

The new Thunderbolts competed in the Marble League 2019 Qualifiers. The new members stunned the competition by coming in 9th and qualifying for Marble League 2019. The new team had a good start to the competition with a 6th place finish for Lightning in Underwater Race, followed by a 5th place finish for Shock in Funnel Race. The team broke the Marble League Record in Event 3, Balancing, before being beaten by the Hazers, earning their first medal as a new team, a silver, moving to joint third overall.

Unfortunately, the Thunderbolts could not keep their momentum and failed to come higher than seventh place in the rest of the competition, apart for a 4th place finish in Event 6, Relay Run, and a 6th place finish for Thunder in Event 14, Surfing. This included two back-to-back last place finishes in Event 11, Dirt Race, and Event 12, Rafting. By the end of Event 13, Elimination Race, the team were no longer eligible for the Marble League title. They still could not turn things around and eventually finished in 13th place overall.

The Thunderbolts put in a bid to host Marble League 2020, but to add insult to injury, they lost to Team Galactic. The team were left dejected as they returned to Thorston. They had to forgo training for the Marble League 2020 Qualifiers for a few months, so as to recover mentally, after which they received an invitation to take part in Marbula One 2020. The team were so relieved upon hearing this that they happily accepted it, and they chose Shock and Bolt to represent them. The Thunderbolts started training again as they wished to put their disastrous 2019 season behind them and keep an eye on Marbula One and all other future events. They also got to host the sixth Grand Prix at their track, the Short Circuit.[2]

Bolt managed to come second at the Greenstone Grand Prix after a mixed start to the season. On their team's home circuit, Shock qualified in 8th, but managed to climb up to 2nd, taking the Thunderbolts to 6th in overall standings. Their poor performance at the last two races led them to finish the season in 8th.

In the Marble League 2020 Qualifiers, the Thunderbolts started off well in Balancing by getting a score of 351. This score gave them 1st place but it was soon topped by Mellow Yellow with 353. At the end of the event, the Thunderbolts got 5th place. In Event 2, Funnel Endurance, Shock started off in 2nd last with just the Minty Maniacs in front of them. By the time Shock reached the last funnel, they started to gain a little time. At the end of the race, Shock managed to get third in their race. This performance kept them at fifth place with 27 points. The next event was Block Pushing. They did not do so well in their heat, losing to the Snowballs but they still came high enough to take them to second place overall, with only the Savage Speeders in front of them. In the final event, the Thunderbolts won their heat, finishing in 7th in the 5 Meter Sprint. This win gave them 4th place at the end of the Qualifiers, enough for them to qualify for Marble League 2020.

The Thunderbolts competed in Group C.

The Thunderbolts took part in two other competitions in 2018: the 100 Meter Water Race and the Amazing Maze Marble Race.

The Thunderbolts qualified for Marble League 2020. 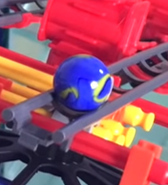 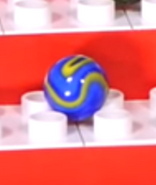 Thunderstorm, the coach of the Thunderbolts.

The Short Circuit, home of the Thunderbolts.
Add a photo to this gallery

Retrieved from "https://jellesmarbleruns.fandom.com/wiki/Thunderbolts?oldid=34354"
Community content is available under CC-BY-SA unless otherwise noted.