1
Speedy is the captain of the Savage Speeders. Along with fellow team member and sibling Rapidly, Speedy is one of the two most successful marbles ever in the Marble League in terms of medals.

Widely regarded as one of the greatest marble athletes of all time, Speedy has earned 3 gold medals and 1 silver medal individually in the Marble League, and another 9 medals with their teammates. Speedy has also earned 2 gold medals, along with two silver medal and a bronze in Marbula One, making them the only athlete to earn 9 individual medals throughout their entire career across 6 years of competition.

Speedy is also well known for winning the Savage Speeders the Marble League championship in 2016, where they won the hurdles event by 0.01 of a second.

Speedy and their sibling Rapidly come from the city of Accellaise. They met Whizzy, Swifty and Velocity during Le Tour de Vellis in 2010, and had no hesitation forming a team when Velocity brought up the idea. The five trained vigorously over the next two years in order to qualify for the marathon. After successfully qualifying, they then made headlines by finishing in fifth, a feat unheard of for a rookie team.

They continued to compete in the next three years, never finishing below the top five. In 2014, they won the Tour for the first time, and repeated that victory the next year. The public started to compare the team to the unstoppable force of early berserkers, describing them as "savage". The team liked it and decided to adopt that word for themselves, becoming the Savage Speeders.

Speedy participated in Marble League 2016 alongside with three other teammates. They participated in six team events. In their very first event, Balancing. Speedy scored the most among the team with a score of 90, the team finished 5th this event. Speedy got gold in the following event with the team in Relay Race.Their first individual event was Long Jump, which they scored 90.4cm and got one point.

After the team jumping into 1st place in the standings, Speedy participated in three consecutive team events but the team failed to score a single point in any of them.

Then Speedy participated in the last event - Hurdles. At this point the Speeders were in 2nd place, tied with Mellow Yellow and Team Momo. They were only two points away from the leader- Thunderbolts. Speedy easily placed first in their heat, beating Kinnowin from O'rangers and managed to qualify for the final. Interestingly, Bolto; Momo; Yellup, respectively from Thunderbolts, Team Momo and Mellow Yellow all managed to qualify for the final. The difference between first and second in an event is three points, meaning that the team that wins the event wins the ML2016.

After the race start, Yellup got up a good start and Speedy was in second place, with Bolto slightly behind. After a few hurdles Yellup slowed down a bit, allowing Speedy to pass Yellup just before the finish line. The photo finish shows that Speedy was 0.01s faster than Yellup. The Savage Speeders won the Marble League 2016 with four golds and 44 points.

The Savage Speeders were auto-qualified for Marble League 2017 because they were the champions of ML2016.The team got off to a slow start, only placing in 11th after Fidget Spinner Collision. Speedy participated in the next event, 5 Meter Sprint. Speedy managed to get silver in this event and elevated the team to 3rd place. Followed by Swifty's silver in Hurdles and their gold in Relay Run, they were leading the rest of the pack with a margin of 22 points. The 5th-place-finish in Block Pushing and the gold in Steeplechase was enough for them to stretch the lead.

The Savage Speeders again pre-qualified for Marble League 2018 because of the 2nd place finish in Marble League 2017. They participated in Friendly Round and got last out of four teams. Speedy participated in Ski Jump and got last with a horrific score of 111.8 cm, nearly 10 cm away from the gold medalist in that event. As a result, Velocity was brought in the roster and replaced Speedy in Halfpipe, and the team managed to get a silver in this event. Speedy then only participated in team events. The team failed to do well in the next four team events and dropped to 3rd in the standings.

Speedy participated in Ice Hockey along with the team. The team were placed in Group A and qualified in second place. A surprising win against O'rangers cruised them into the semi-finals where they lost to Minty Maniacs. However, they bounced back and won in the 3rd-place-match, jumping to 2nd place in the standings, only two points behind the leader Oceanics with only one event to go. Whizzy participated in the final event and got silver, but it was not enough to win this season. The team finished in 2nd eventually.

Speedy participated in Amazing Maze Marble Race. The team were placed in Group D and Speedy got 5th out of 16 athletes. However, Swifty's DNF dropped them to 2nd place, which means they have to place top 2 in all 2nd place teams in order to move on, and were able to do so. The team managed to qualify for the final and Speedy placed 5th again in the final, the highest of their team, but it was not enough for them to win as they finished the tournament in 3rd place.

The Savage Speeders pre-qualified for Marble League 2019 once again and they participated in Friendly Round. Speedy participated in Block Pushing and Relay Run, and got a 3rd and a 4th. Speedy also participated in the final event, Underwater Race. Speedy was in last during the first section, but they did well in the first turn and jumped into 2nd, but the bump at the last turn caused them to lose speed and dropped to last, but strong showings on the front stretch was enough for Speedy to finish 3rd but the team eventually finished last.

Speedy participated in Funnel Race and held the lead for most of the time in Heat A, but dropped three funnels in a row and finished 3rd, which was enough to move on. In the final, Speedy and Foggy from Hazers fought against each other for the lead and Foggy finished 3rd, which resulted in a showdown between Speedy and Razzy from Raspberry Racers, Speedy rolled wide enough to knock Razzy off the funnel, getting the gold for the team.

Speedy's next four team events were mid-pack finishes, and poor individual performances cost them the early lead and they dropped to 7th in the standings. Things turned out better for Savage Speeders as they managed to qualify for the finals in Hubelino Maze and got a high score of 73, but it was not enough for them to win the event as they settled in 3rd, the team jumped to 4th in the standings.

Speedy's next individual appearance was in Surfing. They did not do well in the first round, but did bounce back in the 2nd round with a surfing distance of 28, which placed them in 7th in this event. Speedy then participated in Collision alongside the team but the team failed to score a single point as they lost all three rounds, being the only team to do so. They placed dead last in this event and could not recover and finished 5th this season.

The Savage Speeders were invited to participate in Marbula One Season 1. The team chose Speedy and Rapidly. Speedy was sent to participated in their home-Grand Prix, the Savage Speedway Grand Prix and notoriously qualified in last. In the race Speedy was able to recover as they managed to climb up to 3rd in just three laps, and finished 5th in the end, they managed to finish 7th in Momotorway Grand Prix as well.Speedy placed 9th out of 32 racers during halfway of the competition and their teammate Rapidly was at top, the team placed 3rd. In the second half, Speedy managed to get 3rd in Short Circuit Grand Prix and elevated the team into 1st, but Smoggy from the Hazers won the following Razzway Grand Prix and let the Speeders dropped to second. There was only one GP left to go and Speeders were 14 points behind the Hazers.

During the qualifying session, Speedy managed to take pole, and their rival Hazy only got 15th. Speedy battled against Prim from Team Primary for the lead and managed to win the race, Hazy only finished 8th. Speedy not only took the win for themselves, but also took the lead for Speeders, as Speedy won the individual championship and the Speeders won the team championship. Speedy became the first marble to achieve pole and win the race.

The Savage Speeders did not lose the momentum and placed 1st in the qualifiers. In Marble League 2020, Savage Speeders got off to a very slow start, placing last with only three points. Speedy and Rapidly participated in their first ever duo event, Newton's Cradle, the team started this event in Run 6 and scored 99.80 and they placed 9th this event. Speedy and Rapidly again participated in Black Hole Funnel, the siblings managed to get over 100, which was enough for them to win the event. Speedy then participated in the Relay Run, and served as the anchor leg. They placed 2nd in the heats and the semi-final. In the final, Swifty started off terribly, but Velocity was able to catch up, and a strong hand-off by Whizzy abled Speedy to make the comeback and win the event. The team moved up to 2nd place in the standings. Strong showings in Team Aquathlon and Collision elevated them in 1st place. Speedy participated in this event and got 2nd during qualifying session; while their momentum did not continue and they only finished in 9th, poor showings from both the O'rangers and Midnight Wisps enabled them to win the Marble League again.

Speedy participated in Marbula One Season 2 alongside with teammate Rapidly again. They were at the front pack at the start of the race but retired after getting stuck in the conveyor belt in Minty Mania Grand Prix. They managed to get pole and win in the Honeydome Grand Prix. At the halfway point of the season, Speedy is ranked 7th in individual standings and the team is ranked 11th.

The Savage Speeders were invited and participated in Marble League Winter Special and Speedy only participated in both team events. The team were placing 9th after first three events, even a 6th-place-finish in Bobsled wasn't able to save them as they felled to 10th. For the first time ever since Marble League 2019, they were not eligible to win the championship with only one event to go. In the Ice Hockey event, they easily knocked out the Green Ducks and Snowballs and barely beat Team Galactic. They eventually lost to Raspberry Racers in the final and took the silver. They ended this season in 7th overall, their lowest finish in any competition.

In the second half of the Marbula One Season 2, Speedy started it in style, as they got P2 at the qualifiers of the Raceforest Grand Prix, before finishing 2nd, losing only to Red Eye of the Crazy Cat's Eyes. This lifted the Savage Speeders to 7th overall, with Speedy now in 3rd of the Individual Championship. Next race for Speedy was the Palette Park Grand Prix. After qualifying in 7th, they took the lead after 7 laps and were able to hold onto it throughout most of the race. They eventually finished 2nd, losing only to Wospy of the Midnight Wisps. This brought the Savage Speeders up to 5th overall, with Speedy sitting in 3rd in the individual standings. 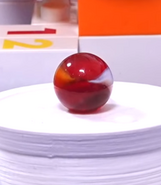 Speedy crowned as the champion of the individual championship in M1S1

Speedy winning the Honeydome Grand Prix (S2) after getting pole.
Add a photo to this gallery

Retrieved from "https://jellesmarbleruns.fandom.com/wiki/Speedy?oldid=34365"
Community content is available under CC-BY-SA unless otherwise noted.