32 points
The Solar Flares are a Marble League team introduced in 2021. Their uniforms are red-orange with navy blue and yellow stripes. The team name was decided in a Patreon vote.

The team hails from Meteorine, a seaside city on the southeast coast of Africa. They competed in the Stardust Classic and the Herbotamia Invitational before attending the Marble League 2021 Qualifiers.[1]

The team started off well in the Qualifiers, getting third in the first event, the Wave. However, they finished poorly in the remaining three events, failing to qualify, relegating them to the Showdown.

Flare, Scorch, Radiance, Ember, and Blaze are the original and current members of the Solar Flares. Flare became team captain upon the team's formation.

Note: Events include any kind of events (friendly events, other tournaments, qualifiers, ...). 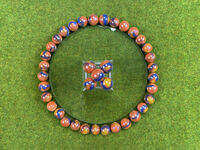 The Solar Flares come from Meteorine, a city on the southeast coast of Africa. Flare, Scorch, Radiance, Ember, and Blaze met in 2012 at Sunspot Beach at one of the regularly organized recreational sports events that all members of the community can participate in. At one of these events, the five marbles competed together in a Swing Wave event, and after a few runs they realized they worked well together as a team.

Every weekend the five would commute in from different parts of the city to Sunspot Beach to compete together and individually in different events. At the end of the summer, the sports program ended and the five marbles decided to enter a local youth league together and chose the name "Solar Flares" after a solar storm threat that had occurred earlier that year. That fall, as the marbles entered secondary school, they started to gain notoriety throughout Meteorine for their sporting abilities.

In 2014, after consecutive victories in the youth league, the Solar Flares were personally invited to compete in the Stardust Classic by Royal Stardust in recognition for their achievements. They accepted and the team minus Blaze traveled to Polaria.

In the summer of 2015, the first Marble League was announced while Team Galaxy were visiting the Flares in Meteorine. The Solar Flares were too young to be invited but celebrated with Team Galaxy when they were invited to compete. In return, Team Galaxy helped the Solar Flares to compete in another established tournament. After being turned down by the MFC Championship League and the Ramen Bowl due to their youth, the team received an invitation to join Ocho's Marble Competitions, a competition in Ochatona in North America debuting in the summer of in 2018. Unfortunately it was delayed by two years to the summer of 2020.

During the delay, the Solar Flares finished their run in the youth leagues in Meteorine and built a training facility, the Fire House, and a small stadium to host friendlies. In the summer of 2020 they finally traveled to Ochatona to compete in the Qualifiers for Ocho's Marble Competitions. Unfortunately, after a series of poor performances they failed to qualify, finishing in tenth overall.

The team returned to Meteorine and pondered the future of the team. However, shortly after their return they received another invitation from Royal Stardust inviting them to come to Polaria to watch Marble League 2020. All five members of the team plus their coach, Eclipse, traveled their and helped Team Galactic train in the month leading up to the competition.

The Solar Flares remained in Polaria throughout Marble League 2020 to cheer on Team Galactic. After the conclusion of the League, Celestial, the intern for Team Galactic, handed an invitation to the Solar Flare's manager, Helios. The invite was for the Stardust Classic Reunion competition, which they accepted.

The team had an average performance throughout the competition, with a high point of a silver medal for Blaze and Scorch in the Black Hole Funnel. The team finished in fourth overall. The team returned to Meteorine to rest.[1]

The Solar Flares received an invitation from the Minty Maniacs to compete in the Herbotamia Invitational Tournament, a competition the team had been interested in competing in but were too young to enter. They accepted and the team traveled to Chlorotopia for the competition.[1]

The team again came in as an unknown, like they had done in the Stardust Classic years before. They won the hearts of the crowd with a gold in the first event, Balancing. They followed this up with a silver medal in the Funnel Race and a bronze in the Sprint. They failed to podium in the next event, Collision. The final event, a lap race of Minty Mania, started well as the Flares took an early lead. However, they were passed by the Grape Nuts in the penultimate lap, leading to another second place finish. This was enough for the Solar Flares to win the Herbotamia Invitational Tournament.

After their victory, a mysterious marble rolled up to the podium and revealed themselves to be Jelle Bakker. As a reward for winning the competition he invited the Solar Flares and the second-place Gliding Glaciers a place in the Marble League 2021 Qualifiers, replacing the Jawbreakers and the Hornets.[2]

Following the invitation, the team returned to Sunspot Beach and trained harder than they had before, even training with Team Galactic for some of the time. After long days of training, the team would return to the Fire House and eat waffles and drink lemonade.

The team arrived in Felynia a little early to see the Crazy Cat's Eyes setting up the stadium. They also went on a tour of the local area, going on trips to Cairoll, the Cat's Dunes and Mirage Meowntain and at one point Radiance got stuck on a cactus. After returning to Felynia, Flare and Blaze started having a sword fight with swords they had picked up. Unbeknownst to them, Red Eye was watching and used this as the inspiration for Jousting.[1]

The Solar Flares were placed in Group B of the Marble League 2021 Qualifiers alongside their friends, Team Galactic. The team got off to a strong start with a third place finish in the Wave. Unfortunately, this was followed by three consecutive bottom half finishes in the remaining three events, including a last place finish in the 5 Meter Relay. This put them in 11th overall, only ahead of Team Galactic, failing to qualify for Marble League 2021.

The Solar Flares returned to competition in the Marble League Showdown 2021. The team had a poor start, with Blaze finishing in ninth in Event 1, the 5 Meter Sprint. This was followed by three more bottom half finishes, dropping them to last place overall at the halfway point. However, Ember managed to save the team with their first medal of the showdown in the Triathlon. Their newly attained gold allowed them to climb into 8th place, however they were not able to hold the position for long, continuing their streak of poor performances and finishing last overall. If Showdown relegation had been in place, they would have been relegated to the Marble League Showdown 2022.

The Solar Flares competed in Group B. They failed to qualify for Marble League 2021. 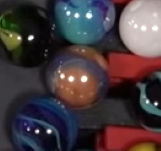 The captain of the team, Flare