Silver with green and blue stripes

54 points
The Shining Swarm are a metallic grey team introduced in Marble League 2017, and are currently represented by Shiny, Sparkle, Shimmer, Sterling and Glimmer.

Before 2020, likely because of the fact that they had only participated in one Marble League edition and won one medal up to that year, the Shining Swarm had a dubious honor of being mostly unknown to the JMR Community – and many fans even tended to forget that the team actually exists.

Shiny, Sparkle, Shimmer and Sterling were the original members of the Shining Swarm. Glimmer was introduced to the team in 2018. Sparkle became team captain in 2019. Shiny took over the role of team captain in 2020.

The Shining Swarm come from the city of Galeem on the West African coast. It is located on a peninsula that juts out from the mountainous mainland, at the mouth of the Silver River. The city is named for the shining waters that surround the city. The team were originally called the Silver Swarm, after the river. They eventually had to change their name so they wouldn't be confused with the Quicksilvers, so they opted for the name of Shining Swarm, inspired by the natural beauty of their homeland which shines in the sunlight.

Prior to their marble sports career, the four original members of the Shining Swarm, Shiny, Sparkle, Shimmer and Sterling, were musicians, and the four formed a band called The MarBeats. The band produced may hits such as "Here Comes The Swarm", "Fidget to Ride", and "I Wanna Be Your Marble". Their most popular song is "Roll Over and Roll Out", whose lyrics reference the growing popularity of regional marble sports tournaments, which is why it resonated with marble sports fans. In 2015, the song was used in a featurette about marble sports tournaments, such as the Surculo, the Ramen Bowl, and the Knikkegen Marble League.

During this time, the four started to gain interest in marble racing, and so decided to form their own marble sports team. They performed their final live concert on a rooftop in Draklin, performing songs from their Marbly Road album. They returned to Galeem in early 2016 and started training as marble athletes. After the conclusion of Marble League 2016, they applied for participation in the Marble League 2017 Qualifiers and were accepted.[2]

The Shining Swarm's first event in the Qualifiers was Relay Race. Shiny rushed out of the gate, but the team then fell behind and finished 12th. The team learnt to conserve their energy in the long run and began to improve. Their best result at the Qualifiers was in Block Pushing, where they came 4th. They finished the Qualifiers in 7th overall, qualifying for the main competition.

The Shining Swarm had a bad start to Marble League 2017. In the first event, the Funnel Race, Shimmer was chosen to represent the team and came in 12th, worse than Sparkle, who had come 6th in the Qualifiers. This was followed by a ninth place finish for Sterling in Event 2, the Long Jump. The team stayed dropped to 13th overall and were on track to becoming another bottom-half forgettable team.

However, the next event, Fidget Spinner Collision, marked the moment where the Shining Swarm truly began to shine. The team have a huge love for Collision events, which is why they have the Swarm in their name – they literally swarm their opponents in Collision events. They had not prepared for the fidget spinners, but neither had any team as rumor has that they were introduced just before the Qualifiers due to their sudden popularity. The team just made it into the knockout stage, coming second in their group after narrowly beating the Chocolatiers.

In the quarterfinals, the Shining Swarm pulled a tiebreaker win against Mellow Yellow, and followed this up with another tiebreaker win against Team Primary in the semifinals. In the finals, they managed to beat the Limers, who had been dominating the event beforehand. This earned the team their first ever Marble League medal. Even through the craziness of the event and Momomomo's injury, the positivity of the team shone through, and the team rode one of the fidget spinners to celebrate. The gold medal from this event took the team into third place overall.

Unfortunately, the Shining Swarm failed to keep this up in the next event, 5-meter Sprint, where Sparkle finished in second-to-last. The team dropped to 9th place overall, and proceeded to stay within the middle of the standings with a streak of modest finishes. The final three events, however, saw the team shine again, with a strong fifth place finish in Event 10, Archery, a fourth for Sparkle in Event 11, the Underwater Race, and another fifth for Shiny in the final event, Sand Rally. The team finished Marble League 2017 in 7th place overall, better than they thought they would.

Such a great performance by the Shining Swarm in their debut Marble League season earned them a great deal of respect from the marblebase. This is especially true when it comes to their incredible performance in the aforementioned Fidget Spinner Collision event, which led to their phenomenal podium finish and a gold medal for the team.[2]

The Shining Swarm's next appearance was in the Marble League 2018 Qualifiers, where they were sorted into Group C, and were joined by Glimmer, who became their reserve member. Unfortunately, they were unable to come above 5th in any of the events, and ended up finishing at the bottom of their group, failing to qualify for Marble League 2018. They went on to attend the main tournament and watched from the stands.

During this time, Shiny, Sparkle, Shimmer, and Sterling reunited as The MarBeats and released one more album called Let it Roll, featuring songs such as "The Long and Shining Road", "Across the Marbleverse", and "Let it Roll", which was the titular song on the album and charted high. The four then officially announced their retirement from the music industry so they could commit to marble sports.

During the offseason, the Shining Swarm competed in multiple events, the first being the Marble League 2018 Consolation Race. Shimmer was chosen to represent the team and came 7th. Sparkle then competed in the 100 Meter Water Race, finishing in 19th. Finally, the team competed in the Amazing Maze Marble Race. Unfortunately, the team finished last in their group. This led to many of their fans questioning their decision to leave the music industry. Some of the members of the team agreed, but they had decided to move to something they enjoy, regardless of how well they do. Marble sports also brings out the best in the team.[2]

Undisturbed by their previous poor performances, the Shining Swarm entered the Marble League 2019 Qualifiers with high hopes. Unfortunately, they performed poorly and only managed to earn five points in the first three events. Shimmer managed to finish 9th in the final event, the Underwater Race, earning 10 points, but it was not enough. The team finished in 19th and failed to qualify for Marble League 2019.

The Shining Swarm prepared for another extended offseason, with several members of the team considering making solo music. However, the team came to hear of the announcement of the Marble League Showdown. They were so excited they started rolling back and forth, mainly because Collision would be returning. As a result, the team went back to training after hiring Gleam as their coach.

During this time, the team also became subject of a meme on the official Marble League Twitter account, naming the Shining Swarm their favorite to win Marble League 2019, despite the team not competing. Their meme status was also helped by the fact that fans keep forgetting the team exist. This actually led to an increase in their fans, nicknamed the "Swarmy". As a result, the team received a newfound determination and were ready to "Rise and Shine".

Unfortunately, the Shining Swarm had a poor start to Marble League Showdown 2019, with an eleventh place finish for Sparkle in the Sand Rally. However, the next event was Collision. The team used the same strategy they had used two years ago to edge ahead of the Kobalts into the quarterfinals. Unfortunately, they lost to the Rojo Rollers in the semifinals, but managed to dominate Team Primary in the bronze medal match. The team got onto the podium for the first time in two years.

The Shining Swarm proceeded to keep this up with a fifth place finish for Shiny in the third event, the Funnel Race, bringing the team into 5th. However, the team faltered in the final event, Balancing, coming in 10th. They ended the Showdown with 22 points, tied with the Minty Maniacs. However, the Minty Maniacs had a silver medal in their medal tally, and so won the tiebreaker for 8th place, meaning the Swarm had failed to qualify for the Marble League 2020 Qualifiers.[2]

During the offseason, the Shining Swarm had to get back into the music industry in order to make money and support their team. To do so, they first hired Sheen as their manager, and it paid off. The team was supported financially, and was ready to make an appearance in Marble League Showdown 2020.[1]

The Swarm started the Showdown with two bottom half finishes in the Relay Run and the Halfpipe putting them in joint eighth overall with the Turtle Sliders, the final qualifying spot. The second half of the competition saw the Swarm turn things around when Sparkle and Shimmer won a silver medal in the team's first duo event, the Black Hole Funnel, taking them away from the danger zone into fifth overall. In the final event, the Sand Mogul Race, Shiny won their heat and moved on to the final. Unfortunately, they missed the podium by finishing in fourth just behind Hop from the Jungle Jumpers. This was enough to put them into fourth overall, giving the team the opportunity to compete in the Marble League 2021 Qualifiers, their first time since Marble League 2019.

The Shining Swarm failed to qualify for Marble League 2018. They competed in Group C.

The Shining Swarm failed to qualify for Marble League 2019.

The Shining Swarm failed to qualify for the Marble League 2020 Qualifiers.

The Shining Swarm qualified for the Marble League 2021 Qualifiers.

The Shining Swarm competed in Group B. They qualified for Marble League 2021.

The Shining Swarm winning a bronze medal in Collision in Marble League Showdown 2019. 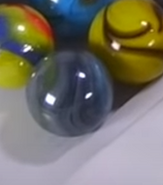 Shiny, the current captain of the Shining Swarm.

Sparkle, the former captain of the Shining Swarm.