72 points
Rozzy is a member of the Raspberry Racers, joining the team for it's inaugural season in 2018 Along with other team members, they hail from the City of Rubow in Central Europe and competed in Fruit Circuit before they disbanded. After that, they competed in Hubelino Tournament 2016 and regrouped to compete in Marble League 2018 Qualifiers.

A less known member of the team, Rozzy is known for their bronze in Dirt Race in where they passed Swifty from the Savage Speeders just before the finish line, they also managed to get a bronze in Newton's Cradle alongside Rizzy. Rozzy has a total of 72 individual points and two bronzes in 9 individual events.

The Raspberry Racers come from the city of Rubow in Central Europe, which is renowned as the raspberry capital of the world, as seen with the many raspberry farms within its vicinity. Razzy was introduced to Rozzy through their trainer Williamette at their local training club. They were then joined by Rezzy and Rizzy from another sports club when the former two are scouted for a Rubovian Professional Team. The team were later joined by Barry as they started competing in the Fruit Circuit, during which they developed a rivalry with the Limers, who hail from the city of Sotsevsa.

In 2015, the last season of Fruit Circuit, by the end of the penultimate race of the season, the Raspberry Racers had been comfortably sitting within the top three all along, standing right behind the Limers in the standings at the time. The team decided to have Barryrepresent them in the final race. Unfortunately, during the race, Barry overshot a curve and went off the road. This mishap allowed Mellow Yellow and the O'rangers to overtake the Raspberry Racers into the final standings, denying them a spot in Marble League 2016.

The Raspberry Racers were distraught that they had failed to qualify for the Marble League, and proceeded to fire Barry for their failure in the final event. Meanwhile, rest of the team members returned to Rubow, after which they decided to participate in the Hubelino Tournament. Razzy and Rozzy joined the Bluefastics, while Rezzy and Rizzy joined the Valiant Violets. The four trained hard as preparation for the Hubelino Tournament 2016.

During the tournament, neither teams were doing quite well as the Bluefastics and the Valiant Violets conclude the tournament in sixth and eighth out of eight teams, respectively. During this time, the four were secretly training together, hoping to get themselves into the Marble League. A month after the Hubelino Tournament 2016 ended, the four left their teams and regrouped with Ruzzy, who had regularly joined them in their training sessions beforehand. The Raspberry Racers were back after a long hiatus, and Ruzzy had became their reserve member.

The Raspberry Racers were invited to take part in the Marble League 2018 Qualifiers, where they ended up in Group C, competing against, among many others, the rival Limers. The team had a poor start to the qualifiers, coming 6th in Curling and 4th in Snow Race but the team was saved by a first place in 5 Meter Ice Dash, and the team jumped to second and remained there after the final event of the qualifiers, Halfpipe. Meanwhile, the Limers also qualified for Marble League 2018 in fourth.

Unfortunately, the Raspberry Racers placed 14th after two events. The team were not deterred and started to make amendments, finishing top five thrice in the next three events and rose to 11th overall. The next event, Team Pursuit, saw the Raspberry Racers narrowly beating the Limers, in the semifinal. The team eventually got second and jumped to 5th place overall. They dropped to 7th after the next two events. The two teams faced off against each other once again in Curling, in the quarterfinals where the team won again. The team later won the bronze, putting the team into 6th in the standings. The team ended Marble League 2018 in eighth overall, while the Limers were sitting down in 14th, 34 points behind them.

The Raspberry Racers performed exceptionally in the Amazing Maze Marble Race and won the tournament, foreshadowing their rise to among the Marble League elites in the next few years. The team declined the invitation to participate in the Hubelino Tournament 2018 as they kept an eye on Marble League 2019.

The Raspberry Racers participated in the Marble League 2019 Qualifiers with their coach, Berry. The team started on a sour note, as Rezzy finished 19th in Funnel Race. However, they started to turn things around by coming 4th in Block Pushing, followed by a seventh place finish in Relay Race. This put the team into 12th. The Raspberry Racers eventually finished 8th overall and qualified for Marble League 2019. The Limers, on the other hand, failed to qualify, losing out to the Chocolatiers for the final qualifying spot by three points.

Rozzy went on to win a bronze medal just before the finish line in Dirt Race. However, the Green Ducks went on to steal the lead from the Raspberry Racers following their win in Event 12, Rafting. Then came the next event, Elimination Race. Rezzy emerged victorious in the final as both their opponents crashed out, winning the team their first ever gold medal. A fourth place finish in Surfing by Rizzy took the Raspberry Racers back into the lead in the standings.The team proceeded to stay in first for the remainder of the tournament including the team's fourth bronze medal in the final event, Sand Rally. They set a record number of medals within a single Marble League season – they had won a medal in half of the events of the season and the most points in a single season with 216 points.

The Raspberry Racers went on to dominate the Friendly Round of Marble League 2020, finishing second in both team events and first in both individual events. This continued with a great start to Marble League 2020, winning a silver medal by scoring a respectable 355 in the first event, Balancing. They placed 9th in Halfpipe and fell to 4th place overall.

In Event 4, the Newton's Cradle, the Raspberry Racers picked up momentum again with a bronze by Rizzy and Rozzy. Later came a gold in the 5 Meter Hurdles. The team stayed in fourth. The team then continued delivering unsatisfying mid-pack finishes, dropping to 6th and are out of championship contention with two events left. Instead of redemption, the team completely faltered in the last two events as the bar for them was "Just Score Points", and thus they got a 15th-place-finish in Collision and a humilating last-place-finish by Rezzy in Marble Marathon, which dropped them all the way to 9th, their worst performance in the Marble League despite a strong start, It was also the first time they've dropped out of top half in the standings since Sand Mogul Race.

The team were invited to compete in Marble League Winter Special, to which they accepted. Ruzzy's bronze in Arctic Circuit GP was the confidence boost the team needed coming into this tournament, and their old rival, the Limers, ironically, weren't invited to compete. The team got off to a good start, by placing top five in the first two events, placing 4th in the standings. The team then got two bottom half finishes and dropped to 9th, completely out of championship contention. Coming into the final event, Ice Hockey, the team went on to win the event and finished the tournament in 4th.

The team was placed into Group B in Marble League 2021 Qualifiers and dominated the qualifiers by winning the first two events and getting 3rd in the third one, pre-qualifying with one event left. The team eventually qualified in 1st place with 42 points, the most out of all teams, making them favourites to win Marble League 2021.

The team proved them to be a force to be reckoned with as they podiumed in the first two events, placing 1st in the standings. Rezzy then won a silver in Funnel Endurance which took the team back to the lead in the standings. The team then got three mid-pack finishes but it was far from enough to hold the lead as Team Momo got three consecutive medals and extended their lead up to 27 points. Block Pushing saw the team breaking the Marble League Record set by the Midnight Wisps in 2020 with more than 7 centimetres, and another 85-plus score was enough for them to win this event, gaining a total of 106 points in the first half of the season, 4 more than what they got in the first half of Marble League 2019.

The team did not keep their momentum going as they quickly slowed down in the next three events by only scoring 19 points. Mellow Yellow jumped to the top of the standings after their silver in Diving, dropping the team to 3rd. Rezzy finished in 8th in Elimination Race and the Raspberry Racers retook the lead by a single point. The team was still in the lead after the penultimate event with a margin of seven points ahead of the Hazers, nine ahead of Mellow Yellow and a total of 11 teams can challenge for the overall champion. A 15th-place-finish in Marblocross cost the team the championship and the team ended the season in 2nd. 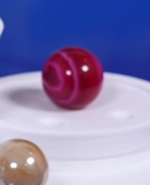 Rozzy on the podium alongside Rizzy after getting 3rd in Newton's Cradle (2020)
Community content is available under CC-BY-SA unless otherwise noted.
Advertisement