15 points
The Purple Rockets are a purple team with white stripes which were introduced to compete in Marble ManiaX.

The team set the record for Diving in 2014, holding it for seven years until it was finally broken during Marble League 2021 by the Shining Swarm. Their record was officially recognized despite having never competed in the Marble League beforehand.

The Purple Rockets are a marble sports team from Sheetersburg. They previously competed in the Stardust Classic and The Emperor’s Marble Sports Games.[2] During 2014 they set a record in Diving which stood until 2021 when the Shining Swarm broke the record during Marble League 2021.[3]

In 2020, Team Galactic announced they would be hosting a reunion of the Stardust Classic in which they invited previous competitors to compete. The Purple Rockets accepted the invitation and travelled to the Andromedome in Polaria to compete. Orbit and Sulfur earned the team their first medal, a gold, in the second event, the Black Hole Funnel. A silver medal in the fourth and final event was enough for the Purple Rockets to finish third overall.[2]

In 2021, it was announced that the team would be competining in Marble ManiaX.[4]

Ⅰ With the tie between the Black Jacks and the Purple Rockets declared unbroken, both teams received 7 points each, equivalent to the average of 6 points (bronze) and 8 points (silver), following the official scoring system. 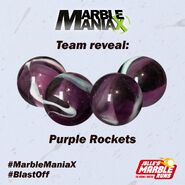