Stynth, along with the JMRC, initially created the lore of the JMR universe while part of the JMRC, with his work being published on the [JMR website] as official canon. After the dissolution of the JMRC, the lore became unofficial, moving to the JMR Expanded Universe. Project Marblearth is the continuation of these narratives by Stynth and other members of the marble community.[1]

Marblearth, where the narratives are set, is geographically identical to Earth but is set in an alternate universe (the marbleverse) where the events of human history never occurred.[2]

There are 27 active contributors in Project Marblearth. 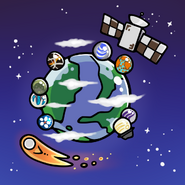