Jelle'sMarbleRuns Wiki
Register
Don't have an account?
Sign In
Advertisement
in: 2020 Tournament, 2021 Tournament, Marbula One,
and 2 more

Green Ducks - 115 pts
Marbula One Season 2 was the second season of Marbula One.

There are a total of 12 races for the second edition of Marbula One. All races are held at different racetracks, and each track features a host team.

Below is the list of tracks for this edition of Marbula One, ordered by date of event.

The teams participating in the second edition of Marbula One were announced all at once on 16 October 2020. Their respective rosters were periodically revealed from 22 October to 3 November. New teams received brand-new Marbula One posters, while returning teams that changed their rosters had their posters edited to show the new team member(s).

Note: ties are broken by the following criteria (in order):

The new Balls of Chaos poster 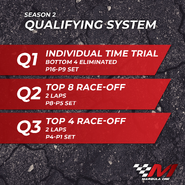