This page lists all teams in Marble League history, along with their performance timeline and lists of standings by year.

The origInal 16 teams that debuted in Marble League 2016.

*Since the Gliding Glaciers were forced to withdraw from the 2017 Marble League Qualifiers, they were technically a newcomer in 2018.

*Four teams were chosen to compete in the Marble League Showdown, alongside the eight teams that failed to qualify for Marble League 2019. The Bumblebees and the Minty Maniacs placed first and second in the Hubelino Tournament 2018. The Hornets and the Turtle Sliders were chosen by the fans, and this marked the first time these two teams competed in a marble race.

**The Indigo Stars, much like the Gliding Glaciers before them, have been known about since 2017. However, since their first appearance in the Marble League was in the 2019 Qualifiers, they were technically a newcomer in 2019.

List includes the year(s) when they were active (hover the year range to view the note):

List includes the year when they originally retired (hover the year to view the note):

†Due to teams being split into groups for the Qualifiers, final standings are based on each team's point accumulation as if all non-qualified teams had been in a single Qualifiers group. 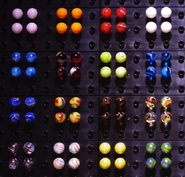 The active teams in the 2016 season

The teams that were active by 2017 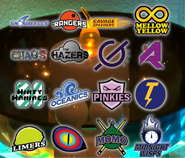 The logos for all teams in Marble League 2018

The old logos for the teams that were active by 2019

The logos for all active teams in the 2020 season

The logos for all active teams in the 2021 season
Community content is available under CC-BY-SA unless otherwise noted.
Advertisement