The first event of the Marble League 2020 Qualifiers was held on the 18th June 2020, featuring the first event, Balancing.

In balancing, teams of four marbles must roll down a track with no walls on it, referred to as a balance beam. If a marble falls off the track, its distance from the start (in centimeters) will be tallied and counted towards the team's final score. Any marble who reaches the green zone at the end of the track earns the maximum individual score of 130, which is also added toward the team's final score. A marble must land in the green zone to score 130; any marble that reaches the end of the beam but does not land in the green zone will only score 120. The team with the highest collective score wins.

The second event of the Marble League 2020 Qualifiers was held on the 18th June 2020, featuring the second event, Funnel Endurance.

The race was similar to previous Funnel Races. It featured ten funnels but the top five funnels were the previous style orange funnels while the bottom five were larger green funnels. The rules were the same as previous funnel spinning events (the last marble to finish wins).

* Leap from the Jungle Jumpers was given two consolation points due to a track defect causing the DNF.

The third event of the Marble League 2020 Qualifiers was held on the 18th June 2020, featuring the third event, Block Pushing.

Two teams roll down tracks into a block and push it as far as they can. The team with the furthest push is the winner.

The fourth and final event of the Marble League 2020 Qualifiers was held on the 18th June 2020, featuring the fourth event, the 5 Meter Sprint.

One marble from each team rolls down a 5 m long track as quickly as they can. The fastest marble down the track is the winner.

An infographic showing the competitors in the Qualifiers, and those who will be absent from it. 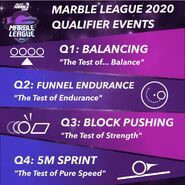 An infographic listing the Qualifier events.