94 points
The Hazers are a Marble League team that originated in the 2018 season. Their uniforms are a mixture of gray and white.

The Hazers qualified in 1st place again for Marble League 2019 and proceeded to finish the tournament in 3rd place overall.

The Hazers finished 2nd place in Marbula One Season 1, losing to the Savage Speeders at the Midnight Bay Grand Prix. They finished Marble League 2020 after a mediocre first half and an inconsistent second half, finishing in 6th place.

Hazy, Smoggy, Foggy, Misty and Cloudy are the original members of the team, and are also the current members of the Hazers. Hazy became team captain in 2019.

The Hazers come from an unspecified region within East Asia. In fact, the team's origins are shrouded in mystery. No one has been able to get any leads on the team's origins, either from the team themselves or from outside sources, although in early 2019, a journalist discovered a Hazers souvenir shop south of Hunluen. The Hazers have indeed been hesitant to talk about their origin, claiming the topic is unimportant. But they insist that they know who they are and what they are doing in the Marble League.

In fact, the mysterious nature of the Hazers has made them subject of curiosity as the marblebase rushed to find out where they come from and what they did before joining the Marble League. The only available hint for their place of origin so far is the fact that they do their training on a mountain top within an East Asian mountain range, beside Mount Huaze. Part of the mystery of the Hazers is their success for a team that appeared out of nowhere.

Hazy, Smoggy, Foggy, Misty, and Cloudy were invited to take part in the Marble League 2018 Qualifiers. Seeded into Group A, the Hazers had a poor first outing. In Event 1, Curling, the team came 7th. However, they instantly turned this around by coming third in the next event, Snow Race. They proceeded to win the next two events, putting them onto the top of their group and qualifying for Marble League 2018.

The Hazers had a strong start to Marble League 2018. Hazy won a silver medal in the first event, 5 Meter Ice Dash. Smoggy followed this up by winning another silver in the next event, Ski Jump, putting the team into 1st place overall. Unfortunately, this also fueled controversy around the team as they came to be accused of cheating. The team ignored the allegations and moved on.

The Hazers surprisingly faltered in the next two events, Halfpipe and Bobsled, finishing in 14th. The team dropped to fourth. Unfazed by this, the team decided to have Misty represent them in Event 5, Speed Skating. In the event, she managed to finish in first and set a Marble League Record with the time of 30.34 seconds. The Hazers won their first ever gold medal, and they rose back to first in the standings.

Unfortunately, the Hazers' strong momentum dissipated during the second half of the games. From this point on, the team fell places in the standings, coming as low as 14th in two events, Team Pursuit and Snowboard Cross. By the end of Event 10, Biathlon, the team were seventh overall, their lowest position in the season. The team proceeded to finish the final two events in the middle pack, making them jump to 6th place overall at the conclusion of Marble League 2018. The Hazers had become the highest performing rookie team of the season.

During the offseason, the Hazers took part in two events. The first was the 100 Meter Water Race, where Foggy, who did not participate in any individual event in Marble League 2018, came in 5th. This was followed up by the Amazing Maze Marble Race, where the team surprised by getting eliminated in the heats. They were tied with the Chocolatiers at third in their group for points.[2]

The Hazers took part in the Marble League 2019 Qualifiers. Just like in the 2018 Qualifiers, the team had a poor finish in one event, though this time a bit different. The team started strong with Hazy finishing third in Event 1, Funnel Race, but the team had a poor performance in Event 2, Block Pushing, finishing in second to last. The team dropped to 11th, but they managed to make up for it by winning the final two events. Once again, the team came at top of the table in the Qualifiers. This helped them prove that their first season was not a fluke.

The Hazers started off Marble League 2019 with a 4th-place finish for Hazy in the first event, Underwater Race. This was followed by a bronze medal for Foggy in Funnel Race, and a gold medal and another Marble League Record for the team in Balancing. The team rose to second in the standings, 8 points behind the Savage Speeders. Sadly, the team had a setback in Event 4, Gravitrax Slalom, finishing in 15th, although they still managed to hold on to 2nd place overall.

The next event, 5 Meter Sprint, saw Smoggy finish second behind Yellow of Mellow Yellow and win a silver medal. This eventually put the Hazers into first place overall. However, the team then fell into a rut, similar to how they had been doing in the second half of the previous year. Over the next three events, the team failed to get anywhere higher than 8th place, including a last place finish in Event 7, Block Pushing. The team fell to 5th overall.

The Hazers went on to fight through the second half of the tournament, with a bronze medal for Foggy in Event 9, Hurdles Race, followed by the team's second gold medal of the season in the next event, Hubelino Maze. They moved up to 2nd place and maintained their position in the top three for the rest of the season. The team earned another bronze medal in Event 12, Rafting, and Hazy won a silver medal in Event 14, Surfing, setting the team up to be one of the three candidates for the Marble League 2019 championship title.

The Hazers finished 11th in the penultimate event, Collision, but the Savage Speeders finishing in last place ensured the Hazers would finish in the top three, along with the Raspberry Racers and the Green Ducks. This was the first time that none of the original 16 teams from Marble League 2016 would end a season within the top three, something the Hazers had been waiting to happen for years. It made them feel honored to be part of the competition as they finally managed to overcome the more decorated and experienced teams. After the final event, Sand Rally, where Smoggy finished in 11th place, the Hazers finished in third overall and automatically qualified for Marble League 2020.

While training for the Marble League 2020 Friendly Round, the Hazers received an invite from the JMRC to take part in Marbula One Season 1. The team accepted and chose Hazy, "Jetstream", and Smoggy, "Smokebomb", to represent them, believing that they both could translate the team's performance in the Marble League into Marbula One. To clear up the controversy regarding their origins, the Hazers were kind enough to give a hint about their origins through their announcement poster.[2]

Hazy made his debut at the Savage Speedway Grand Prix, qualifying in 9th. He managed to climb up the rankings and took the lead in lap 8. He went on to lose the lead, but still finished the race in second. Smoggy made his debut at the O'raceway Grand Prix, where he managed to qualify in second. Out of the gate, he took the lead and held it until lap 3, when he lost it to Billy of the Green Ducks. He finished the race in third, and the Hazers rose to the top of the standings.

The Hazers continued to do well throughout the competition. Hazy scored the third consecutive podium finish for the team by finishing in third at his next appearance at the Momotorway Grand Prix. This was followed by a fourth-place finish for Smoggy at the Hivedrive Grand Prix, where he also earned an extra point for setting the fastest lap. Unfortunately, the team's consistency faltered when Hazy, after qualifying in 5th at the Greenstone Grand Prix, dropped to a disappointing eleventh-place finish. This was followed by an eighth-place finish for Smoggy at the Short Circuit Grand Prix, which dropped the team into second behind the Savage Speeders.

Smoggy appeared in his last race of the season at the Razzway Grand Prix. He qualified in 2nd, just behind Mimo of Team Momo. Smoggy ended up leading the race for all but one laps, and won his first ever Marbula One Grand Prix. The Hazers regained their lead in the standings, 14 points clear of the Savage Speeders. With this, the team were looking confident as they were in a strong position to win the inaugural Marbula One Teams' Championship. Smoggy also took the lead in the individual Racers' Championship standings.

Unfortunately, Hazy did not perform very well at the qualifying for the final race, the Midnight Bay Grand Prix, while Speedy of the Savage Speeders got pole position after a controversial early start. During the race, Hazy battled his way into the top ten, but couldn't get past eighth place, which was where he finished. Meanwhile, Speedy went on to win the race. As a result, the Hazers missed out on the Teams' Championship as the Savage Speeders stole the lead from them at the end of the season, while Smoggy dropped to third in the final standings of the individual Racer's Championship, also missing out on the title.[2]

Since the Hazers finished 3rd in Marble League 2019, they automatically qualified for the Marble League 2020. Fans were worried that the Hazers would end up doing badly in Marble League 2020, due to the superstition of the 3rd Place Curse. The Hazers had a very consistent top half by serveral mid-pack finishes. They only placed 9th after the first half. However, Hazy managed to finish 2nd in Sand Mogul Race, which elevated the team to 6th in the overall standing. The team continued to perform strong and got 1 more bronze. In the end the team finished in 6th.

In the Minty Mania Grand Prix, Smoggy pulled out the pole position, gaining an extra point, But then they fell back to twelfth. Hazy did even worse at the O'raceway Grand Prix, with his qualifying time being only good enough for 19th place, meaning he failed to qualify for the race.

The Hazers competed in Group A.

The Hazers took part in two other competitions in 2018: the 100 Meter Water Race and the Amazing Maze Marble Race.

The Hazers took part in Marbula One Season 1. They were represented by Hazy and Smoggy.

*Smoggy had the fastest lap earning him 1 extra point.

Hazy, the captain of the Hazers. 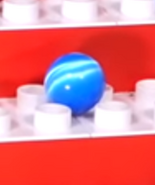 Smokey, the Hazers' coach.
Add a photo to this gallery

Retrieved from "https://jellesmarbleruns.fandom.com/wiki/Hazers?oldid=30504"
Community content is available under CC-BY-SA unless otherwise noted.