Transparent with a green center

88 points
Green Eye is a member of the Crazy Cat's Eyes. Along with the other team members, they come from the North African city of Felynia and participated in the 2015 Knikkegen Marble League before competing in the Marble League. Green Eye currently holds the Marble League Record in the 5 Meter Sprint.

Regarded as a crucial member of the team, Green Eye has performed well in sprint events multiple times, getting two medals in 5 Meter Sprint, including breaking the Marble League Record twice in the 5 Meter Sprint and getting the gold medal in Marble League 2021. They're also known for their dominant performances in Funnel Race where they managed to win the event by a margin of more than twelve seconds.

Green Eye have participated in nine individual events and have scored a total of 88 individual points.

Green Eye and their teammates came from the city of Felynia in North Africa, a city sandwiched between two rivers and it's known for it's prestige in film and entertainment. Their career began when they were selected from their respective district to represent Felynia in sport. Their team started their careers at the 2015 Knikkegen Marble League, in which they finished 11th. In Late 2017, the Crazy Cat's Eyes were accepted into the 2018 Marble League, and as a result, the team headed to the Arctic Circuit in Hailfern to compete.

The team started Marble League 2018 with an eleventh-place finish in the 5 Meter Ice Dash by Green Eye. It was followed by a bronze from Yellow Eye in the Ski Jump, putting them into fifth overall. Unfortunately, the team faltered in the Halfpipe, finishing in fifteenth, falling to tenth overall. The team made amendments by getting three sixth-place finishes in the next three events, placing them in eighth overall at the halfway mark. From this point on, the team began to lose their momentum. They finished bottom half in five out of the remaining six events and the gold in Biathlon was only enough for them to finish in tenth at the end of the standings.

The team's poor finishes continued into the off-season, coming last in the Amazing Maze Marble Race. The team started to doubt their performances, especially because of their poor second half in Marble League 2018. Also during the off-season, the team visited the Turtle Sliders, who took them boating around nearby islands, a stark contrast to their desert home, as well as showing them their facilities and training together. This led to a strong friendship between the teams, with the Sliders visiting the Cat's Eyes in Felynia in later years.

In the first event in the Marble League 2019 Qualifiers, the Funnel Race. Green Eye managed to win the event, well ahead of the rest of the field. Undaunted by their last place finish in the next event, Block Pushing, the team proceeded to perform well in the next two events, qualifying for Marble League 2019 in third overall.

The team got off to a slow start in Marble League 2019, placing in 13th after two events. The team turned their fortunes around by medalling in the next three events, including one gold and two bronzes. This run of medals lifted the team into fourth overall. The team continued the with six bottom half finishes in the next seven events, which was somehow enough to keep them hovering around fifth and sixth overall. Then came the Elimination Race where Red Eye managed to get a bronze. Unfortunately, the team started to lose sight of the competition. Red Eye was already tired from their performance in the previous event, causing them to finish last in Surfing. This was followed by two bottom three finishes in the final two events. The Crazy Cat's Eyes ended Marble League 2019 in 11th overall, which was a huge disappointment for the team.

During the off-season, The Turtle Sliders visited Felynia and the two teams trained together. The team were rarely seen at their training sessions during the offseason. Rumors started to spread that they had gone out to the Cat's Dunes to train.

During the offseason, Felynia's High Council, led by Cleocatra, invested heavily in the team and appointed a new manager, Bullseye. The Crazy Cat's Eyes returned in the Marble League 2020 Qualifiers. The team finished 1st in Balancing with a score of 407 cm. Cyan Eye was selected to participate in Funnel Endurance and finished 9th, which kept the team in first overall. In the next two events the team got a 16th and a 3rd respectively, making the team finish in second overall, qualifying them for Marble League 2020.

The Crazy Cat's Eyes had a successful start to Marble League 2020, getting seven top-8 finishes in a row, putting them in second overall just before the half way point. Unfortunately, as had happened in previous years, the second half of the competition did not go as well. The slump began with a 12th place finish in the Triathlon by Green Eye. A brief glimmer of hope if returning to form came with a bronze medal in the Black Hole Funnel. However, they crashed back down with a run of four bottom half finishes putting them in fifth with one event to go.The team sent Red Eye for the final event, the Marble Marathon. Red Eye had a good race and finished 3rd in the end, making the team finish in 5th overall, their best Marble League finish so far. After the Closing Ceremony, they were revealed as the hosts of Marble League 2021, auto-qualifying them for the competition.

The High Council had a large budget for Marble League 2021 and immediately got to work, tearing down Felynia's athletic fields and building the Felynia Coliseum, with a capacity of nearly 20,000. This meant the Crazy Cat's Eyes had business deals and stadium construction to manage as well as training. After Marble League 2020, the Cat's Eyes along with other marbles went to encourage their friends the Turtle Sliders who had another disappointing time in Marble League Showdown 2020. They also allowed them to again visit Felynia to train with them.

The Crazy Cat's Eyes were invited to participate in the Marble League Winter Special. Blue Eye managed to win the first event and set a new Marble League Record. Unfortunately, things turned downwards after that as the team failed to place higher than eighth in the remaining events, including a last place finish in the final event, Ice Hockey. Despite a promising start, the Crazy Cat's Eyes could only manage an 11th place finish overall.

The same week that all 2021 Marble League teams were in Felynia for the group draw, the High Council organized the Marble League 2021 Practice Race to exhibit the natural beauty and wildlife of the city. Red Eye was sent to participate and finished fifth. The Solar Flares arrived early to the city and went sightseeing. When they returned, Flare and Blaze started having a sword fight with souvenir scepters they had bought. Red Eye saw them dueling and this gave them the idea for a Jousting event.

The draw happened at the same time as the grand opening of the new stadium. A parade was held on the streets of Felynia featuring the Crazy Cat's Eyes as well as all 20 competitors from Marble Rally Season 5. A ceremony took place inside the stadium in which the team was presented with a Key to the City and two roads were renamed Red Eye Way and Yellow Eye Road. All 28 teams were then welcomed onto the stage and each team was sorted into Group A or B. The Cat's Eyes again trained with the Turtle Sliders to help both teams prepare for Marble League 2021.

The team had a poor start to the Friendly Round with a last place finish in the Wave. However, they managed to turn things around by winning the next two events and finishing second in the final event, winning the Friendly Round. Despite this, they placed dead last in the standings after two events. However, the team quickly turned things around in the 5 Meter Sprint where Green Eye won gold and broke the Marble League Record twice, taking the team into ninth overall. The team placed mid-pack in the next four events, taking the team into eighth. Two bottom two finishes dropped the team to 13th. The team then managed to make a comeback including a silver in the Elimination Race and a gold in the Sand Rally, which jumped the team to 3rd. The team placed dead last in Football, thus dropping into 7th with one event to go. Red Eye wasn't able to replicate their dominant performances in Marbula One Season 2 and finished fifth in Marblocross, and the team finished in a respectable fifth in the standings. 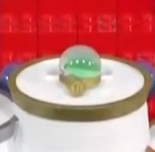 Green Eye after winning gold in the 5 Meter Sprint (2021)
Community content is available under CC-BY-SA unless otherwise noted.
Advertisement