0
The Gliding Glaciers are a white team with light blue and brown swirls. They first appeared in the Marble League 2018 Qualifiers.

The original team was from the island city of Guuk. They met while at the University of Snoronto and became rivals with the university's other main team, the Snowballs.[1]

The team came out of retirement for the Marble League 2021 Qualifiers with a new roster, replacing the Jawbreakers.[2] They placed 5th in Group A and qualify for the main tournament.

Glide, Glidy, Glace, Glacie and Glacier were the original members of the Gliding Glaciers. In 2021, after coming out of retirement, a new team was recruited, with captain Alpine, members Frost, Iceberg, and Polar, alongside reserve Sheet. Alpine became team captain upon the team's return.

The Gliding Glaciers come from the island city of Guuk, known for its small population and large glaciers. The four original members, Glide, Glidy, Glace, and Glacie, were friends from childhood and dreamed of going beyond the large glaciers surrounding the city, amplified by stories of adventure taught in school. They all promised that they would follow the dream of adventure and exploring the world for the rest of their lives.

The four ended up attending the University of Snoronto where they met Glacier, a history major from Kebearing, a city to the east of Snoronto. Glacier was also passionate about adventure and exploration through history and quickly joined the friendship group. The passion for adventure led the five to become interested in athletics too. They eventually started to train together at the university gym, where they encountered the Snowballs. The groups did not initially get along, becoming rivals in both academic and athletic competitions.

The Snowballs and the Gliding Glaciers decided to hold tournaments against each other in a variety of winter sports, including bobsled, curling and ice dash. These competitions started to define the university's culture as they were covered by local and regional news stations. The more they competed against each other, the lower the stakes felt to the point where they started to realize they had a lot in common and started to become more acquainted.

News of their competitions started to spread internationally and came to the attention of Jelle Bakker. As the Snowballs were leading the competition at the time, Jelle invited them to compete in Marble League 2016, which they accepted. This led to some awkwardness as the Glaciers felt they were just as good as the Snowballs.

Both the Snowballs and the Gliding Glaciers graduated in Spring 2016, ending their university rivalry. The Glaciers moved to Kebearing. Glacier had been working on an artificial bobsled track for an engineering course and ended up commissioning the construction of the actual track. The Glaciers finalized their design and construction started in the summer. Once completed, they planned to hold a friendly round to celebrate. The team contacted Jelle, who in return offered to sponsor the tournament and also helped contact other teams.

Unfortunately, only the Snowballs were available to contact, and they accepted. As a result, the planned friendly round became yet another part of the rivalry showdown. During the competition, the Gliding Glaciers set a track record of 6.588 seconds, over a second faster than the Snowballs. This was the final of the showdown, and this led to them winning the showdown 3-2.

Following their recent success, the Gliding Glaciers decided to apply for participation in the Marble League 2017 Qualifiers, and Jelle gratefully accepted. Unfortunately, the team's application was revoked by the rules committee not long after, due to their uniform being too similar to the uniform of the Jawbreakers. Their place was later given to the Quicksilvers. The Purple Stars (later known as the Indigo Stars from 2019 on) were also to take part in the Qualifiers, but withdrew for an unrelated reason.[3]

The Gliding Glaciers were cleared to participate in Marble League 2018 and competed in the Qualifiers. They had hoped to be the hosts of the competition, but the Snowballs were chosen due to the construction of their new stadium, the Arctic Circle. The Glaciers were deliberately placed in a different group from the Jawbreakers to minimize confusion.

Expectations were high for the Gliding Glaciers due to the winter theme of the events, giving them enough confidence to take on the competition. However, the team performed poorly and stayed in last in their Group for the entirety of the Qualifiers, being mathematically eliminated from qualifying before the final event. Without the pressure of qualification, the team managed to finish in fourth in the final event, Halfpipe, but it was already too late for the Glaciers. Throughout the Qualifiers, they did not score a single top three finish out of the four events. They watched Marble League 2018 from the stands.

The Gliding Glaciers competed in two off-season events, the Marble League 2018 Consolation Race and the 100 Meter Water Race. In the latter, the team, represented by Glide, surprised most of their opponents by overcoming them and finishing third, behind the Jungle Jumpers and the Limers. It was the highest point of the team's professional sports career ever. However, Glide came away feeling conflicted after their unexpected success. Much like the rest of the team, Glide began to feel that the five would be better off sailing oceans and climbing mountains instead of competing in marble sports.

During the Amazing Maze Marble Race, it was announced that the Gliding Glaciers had retired and would thus not participate in the Marble League 2019 Qualifiers.[4] Reporters and sports observers attempted to contact the team, only to find out that they had disbanded. The five former members set off on an adventure to explore the entirety of their home island. They climbed to the top of one of the glaciers and watched the sun rise. They then raced down the slopes in bobsleds, thrilled by the feeling of truly enjoying their lives away from the stress of the competition.[3]

Despite having disbanded, the Gliding Glaciers had not ruled out a return to marble sports. They joined the acclaimed travel company Atlas Marbura in early 2019 and lead the northernmost branch in Guuk, writing travel guides. They also worked with the JMRC in 2020 to help Stynth travel across Marblearth. Also in 2020, they were contacted by the JMRC for their artificial bobsled track designs. The JMRC requested the design for the purpose of the Marble League Winter Special. The Glaciers sent the plans to them free of charge.[3]

Candy, the captain of the Jawbreakers, called up Glide shortly after the Marble League Winter Special. The team was planning on retiring and wanted to inform the Glaciers of the news first due to the Glacier's original rejection. Glide thanked Candy for the opportunity to take their place but declined. Glide later had an idea to recruit a new team to compete in their name. Glide told the rest of the team and they all supported the decision, with Glacie offering their home in Guuk as a place for the new members to stay.

The team was invited by the Minty Maniacs to participate in the Herbotamia Invitational to test out the new team.[3] The Glaciers started with a bronze medal in Balancing followed by a gold medal in the Funnel Race for Frost, a silver medal in the Sprint for Sheet and a second silver in Collision. The Glaciers finished in the mid-pack for the final event, a lap race around Minty Mania, and finished in second overall behind the Solar Flares and ahead of the Yarble Yellers. While on the podium, a disguised marble appeared and revealed themselves to be Jelle Bakker. Jelle offered the top two teams a place in the Marble League 2021 Qualifiers to replace the Jawbreakers and the Hornets.[5][3]

The Gliding Glaciers were placed in Group A in the Marble League 2021 Qualifiers, the same group as their rivals, the Snowballs. The two teams were put in the same heat in the first event, the Wave and Gliding Glaciers managed to beat the Snowballs and finished the event in fourth. A seventh-place-finish and an eighth-place-finish in Funnel Endurance and the 5 Meter Relay respectively dropped the team down to eighth, four points away from the qualifying zone. They decided to send their team captain, Alpine into the final event, the Sand Rally. Alpine took the lead immediately and held it for a good chunk of the race, but dropped to third. Before the end of the race, Alpine was able to rise to second where they finished. This was enough for them to qualify, finishing fifth in this group, while their rivals, the Snowballs, failed to qualify.

The competition started to improve again for the Glaciers with a second bronze medal in Event 8, Block Pushing, taking them to 13th overall. This was followed by a string of top half finishes in three of the next five events, but this was not enough to lift the team out of 13th overall. At the Sand Rally, however, their captain Alpine got silver, their third medal in the Marble League, lifting them up to 11th overall. At Football, things went even better, as the team won their first ever gold medal, propelling them even further up into 5th overall. In the final event, the Marblocross, they managed to get 6th which was just enough to get them third in the overall standings, leaving them with a bronze medal at the end of the season, and therefore auto-qualifying them for Marble League 2022.

The Gliding Glaciers failed to qualify for Marble League 2018. They competed in Group B.

The Gliding Glaciers took part in two other competitions in 2018: the Marble League 2018 Consolation Race and the 100 Meter Water Race.

The Gliding Glaciers competed in Group A. They qualified for Marble League 2021.

The team finished third in this tournament with 153 points, winning one gold, one silver, and two bronzes. 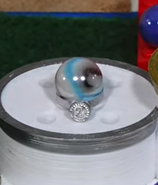 Alpine, the captain of the team