2
Clementin is one of the members of the O'rangers. They are one of the original members of the team, alongside Kinnowin, Tangerin, and Mandarin and the reserve member Orangin, they are from the O'Marbles family, who run an orange farm close to the city of Orlango.

Clementin is a decent athlete in both Marble League and Marbula 1. They have a total of 88 individual points by participating in only 8 events, showing strong consistency in their career.

They are most famous for their heroics at the Sand Rally in 2017, which delivered the O'rangers their first, and so far only title. They are also famous as Clementin got stuck right after the starting gate in Funnel Race in 2019 and finished last without any consolation points. This caused great controversy around the whole fanbase.

The O'rangers are a team of five siblings from the southeast of North America. The five come from the O'Marbles family, who run an orange farm close to the city of Orlango, and also specialize in bull-wrangling and off-road racing. Mandarin, the current patriarch of the family, founded the O'rangers with their siblings Clementin, Kinnowin, Tangerin, and Orangin in 2006, and participated in local competitions.

Clementin participated in Marble League 2016 with three other teammates. The team went to the first event, Balancing, under the names O1, O2, O3 and O4, coming in 9th. Clementin got 99 in this event. In Event 5, Long Jump, Kinnowin broke the pre-existing Marble League record by nearly 10 centimeters, winning the event and earning the O'rangers their first medal ever, a gold, and 10 points. They elevated to 7th in the standings. The team dropped to the bottom half in the standings after Tangerin got 0 points in High Jump, but Clementin managed to finish 4th in 10 Meter Sprint and elevated the team to 6th in the standings. Kinnowin was sent to participate in the final event, Hurdles and got 7th, the team was able to finish the season in 5th place.

The O'rangers qualified for Marble League 2017 in third. They started the main competition in the upper half of the field. Clementin participated in Hurdles and managed to make a comeback in the semi-final, jumping over Starry from Team Galactic and qualified for the final in 1st. Clementin wasn't able to keep the momentum and finished 3rd this event. The team had continued their training even during the Marble League, but they eventually decided to stop so they could conserve their energy. However, as of Event 6, Relay Run, the team had dropped to 9th in the overall standings.But the O'rangers would soon make up for it by earning themselves a gold medal in Event 7, Block Pushing, moving up five spots in the standings into 4th place. The team proceeded to get one podium in next three events. In the penultimate event, Underwater Race, Kinnowin beat the Marble League record in the semifinal and, in the final, finished second behind Wospy from the Midnight Wisps. This was enough to close the gap to the overall leaders and their rivals for the title, the Savage Speeders, to just 10 points.

In the final event, Sand Rally, Swifty of the Savage Speeders was eliminated in the first heat, leaving the door to the championship wide open for the O'rangers. In fact, Clementin comfortably finished in the top 4 in their Heat race. Even though they finished second to Starry of Team Galactic, the O'rangers were able to steal the lead in the overall standings from the Savage Speeders to win Marble League 2017. But that's not all, they also automatically qualified for Marble League 2018. The team followed this up with a world victory tour. It was such a big deal that they closed the O'Marbles farm for a month and invited their entire family on the trip, causing a month-long decline in orange production.

The year started with the Friendly Round, where the O'rangers came in third. But that didn't matter much as the team emerged as the most consistent of all competing teams in Marble League 2018, finishing within the top half in ten out of the twelve events., including Clementin's 7th place finish in Speed Skating. In the first nine events, they only scored a bottom half finish once in Event 3, Halfpipe. Just like the previous year, the team used the strategy of conserving their energy. They eventually claimed their only medal of the season, a silver, in Event 10, Biathlon, taking them to 2nd place overall.Unfortunately, the O'rangers could not keep it up in the final event, Sand Mogul Race. The team still had a chance of winning the League, but Kinnowin came in third in their heat and was thus eliminated. The team dropped to 4th overall at the end of Marble League 2018 and were nine points behind the Oceanics, seemingly missing out on pre-qualifying for Marble League 2019, despite their consistency throughout the season.

Clementin finished in the mid-pack in the group stage and the semi-final round in Amazing Maze Marble Race, but managed to shone in the final as they and Kinnowin finished the race in 1st and 2nd respectively, but it was not enough for them to win the tournament and settled in 2nd.

The O'rangers, along with their new coach Rango, arrived at the Seven Seas Stadium for the Friendly Round before Marble League 2019. The team finished in second place, just one point behind the Oceanics. However, the O'rangers started off poorly in Marble League 2019. Kinnowin finished in 14th in Event 1, Underwater Race. This was followed by Clementin crashing into the wall at the start of the next event, Funnel Race, leading them to stop due to head trauma. They were unable to finish, and the team dropped to dead last overall for the first time in their history. The doctors confirmed Clementin's injury was minor, but recommended them to stay off the roster for a couple of events.The O'rangers followed this up with three middle of the pack finishes. However, in Event 6, Relay Run, the team earned a silver medal, moving the team up to 9th overall.

The team continued to drop since then and a disappointing eleventh place finish in Surfing confirmed the O'rangers would no longer be able to finish in the top three. The next event was Collision, where the team admittedly had never got past the quarterfinals. However, they impressed the fans by winning the event, earning their first gold medal since 2017. The team jumped to 7th place overall. Along with this gold medal, Kinnowin was able to get 4th in the final event and the team finished 6th this year. Through the struggles, the team had grown even stronger. While training for the Marble League 2020 Qualifiers, the O'rangers received an invitation to participate in Marbula One Season 1. Interested, they accepted it, and chose Clementin, "Our Darling", and Orangin, "True Orange", to represent them. The O'rangers quickly became a much-favored champion candidate in Marbula One as the fans believed that their strong overall performance in Marble League could be extended here.

In fact, Clementin was able to prove the O'rangers' status as a championship candidate by getting the pole position in their debut at the Savage Speedway Grand Prix. However, during the race, they hit an attenuator and fell behind, finishing in sixth. Clementin's next appearance was at the Momotorway Grand Prix where they came 5th, but did manage to get the fastest lap. Orangin started to turn their season around by qualifying in second at the Hivedrive Grand Prix, but they fell victim to the Hive during the race and finished in 8th. The O'rangers were ninth in the standings. The team came to realize they needed a breakthrough in the second half of the season.

The O'rangers started to turn their fortunes around at the Greenstone Grand Prix where Orangin won the Grand Prix, their first individual medal. Two Grands Prix after that, Orangin finished in second in Razzway as well as setting the fastest lap. This brought the O'rangers to third overall with one Grand Prix left.The qualifying for the Midnight Bay Grand Prix was mired in controversy due to an incident, where Speedy of the Savage Speeders started their qualification lap before Clementin had even finished theirs. Even though it had nothing to do with the incident, Clementin qualifying in 11th was a great blow to the O'rangers' chance to win the championship. The team's fate was sealed by a twelfth place finish, making the team finish in third overall. They had managed to set three out of eight of the fastest laps, more than every other team.

But then, in the High Jump event, Mandarin won the event as their title contenders Savage Speeders finished last, causing the lead to be extended to 35 points.However, a terrible 11th place finish in the Team Aquathlon, losing out to the Oceanics, whom was notorious for their poor performance in water events, followed up by an abysmal 16th place finish in Collision, saw them dropping to 2nd, 5 points behind the now-leaders and bitter rivals, Savage Speeders. In the last event, Kinnowin is unable to successfully to assert control in the Marathon event, and they lost out to the Savage Speeders by 7 points, finishing in 2nd.

After the Marble League ended, the O'rangers were invited to the second season of Marbula One. They accepted, and once again sent out Clementin and Orangin for the new season. The O'rangers had a torrid start to the season, as Clementin and Orangin both scored no points at their debuts in the season, and despite some decent performances, the O'rangers were stuffed at 16th in Marbula One, behind the likes of the Limers and Kobalts. But then, Clementin qualified at 3rd in the final Grand Prix in 2020, and proceeded to win a silver medal at the Arctic Circuit. Thanks to this, the O'rangers shoots themselves up to a more respectable 8th place to end the year.

During the offseason time, the O'rangers were invited to participate in Marble League Winter Special and they accepted. They had a slow start. Clementin delivered a 9th place finish in the opening event, the Ice Dash, but then the captain Kinnowin also failed to impress and got 7th in Snowboard Cross, dropping the team to 10th in the standings. Orangin only got 11th in Speed Skating, dropping the team to only 11th with two events to go. In the Bobsled coming up next, O'rangers managed to break the record set by Gliding Glaciers three years ago. The team jumped to 4th with only one event to go. In the final event, O'rangers met Pinkies in the round of 16 and beat them in the round of 16, and bet championship contender Minty Maniacs in the quarter-finals, and became the only team able to overtake the leader, Oceanics only if they get gold in this event. However things did not work out and they were beaten by Raspberry Racers in the semi-final. They faced Team Galactic in the Third-place Round and won, getting 3rd place in this event, jumping into 2nd place in the standings.

The team entered the second half of Marbula One Season 2 in 8th place, 8 points behind Team Galactic. However, things did not go well in the first Grand Prix in 2021, as Orangin qualified at 15th at the Raceforest. In the race, a 9th place finish was not enough, and the team dropped to 10th overall. Clementin qualified 10th in the following Grand Prix, but was able to climb to 4th and clinched 12 points. Orangin then qualified 7th in Palette Park Grand Prix. Despite dropping to the bottom pack at the start of the race, Orangin made a comeback and finished 7th. The team stayed at 9th with three races to go.

Clementin after getting 3rd in Hurdles in ML 2017

Clementin after getting 2nd in Arctic Circuit Grand Prix (S2) 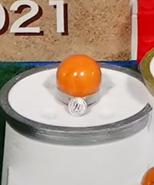 Clementin after getting 2nd in 5 Meter Hurdles in ML 2021