Jelle'sMarbleRuns Wiki
Register
Don't have an account?
Sign In
Advertisement
in: Marbles, Balls of Chaos, Marble League,
and 11 more

0
Anarchy is the captain of the Balls of Chaos. They were first introduced in Marble League 2016.

Anarchy's biggest achievement to date is setting the record of 121.0 cm for Ski Jump during Marble League 2018 (previously the record was 120.7 cm) and winning gold medal for Balls of Chaos.

The four original members of the Balls of Chaos, Anarchy, Clutter, Snarl, and Tumult, competed in marble sports youth leagues since they were very young. Unfortunately they consistently placed within the bottom half of the standings. It seemed unlikely the team would ever compete in an international competition. But their love for marble sports, combined with the resilience stemming from their failures, was the thing that made them keep going.

The four continued to train together during their school years, and were admitted to university on account of their outstanding performance record in marble rallying. During their time at university, the team began to compete in regional competitions, including the MFC Championship League. They were the only team in the MFC that were still in university at that time. In 2014, they managed to finish in 4th.

In 2015, the Marble League was announced, and three invitation spots were offered to the MFC. It looked like the Balls of Chaos would miss out on getting invited. However, the top three finishers declined their spots, so the fourth-placed Balls of Chaos were surprised when they were offered a spot in Marble League 2016, which they accepted. The fifth-placed team also declined, while the sixth-placed Pinkies joined the Balls of Chaos. The last spot was then given to Team Momo, the top-ranked team from the Ramen Bowl, due to the indifference of the other MFC teams.[1]

The Balls of Chaos had a poor start to Marble League 2016, with a last-place finish in Balancing and a disqualification from the Relay Race. The team finally managed to reach positive points after Clutter came 7th in Event 5, Long Jump.

True to their newfound morale, the Balls of Chaos proceeded to finish every subsequent event within the top half up to Event 11, Quartet Diving, where they finished in last once again. This included their first medals, a bronze for Clutter in Event 8, the 10 Meter Sprint, and a team silver in Event 9, Team Pursuit, as well as a 7th place finish for Anarchy in the Water Race. The team finished 8th overall, tied with the Jawbreakers for points, but behind them for medal count.[1]

Unfortunately, the Balls of Chaos couldn't keep it up in the Marble League 2017 Qualifiers. They started off with mediocre results, coming 7th in the Relay Race and 10th in the Sand Race, but followed this up with a fourteenth-place finish in Block Pushing. A ninth-place finish in the final event, the Funnel Spin, sealed their fate. The team finished in joint 13th overall and failed to qualify for Marble League 2017. However, they did make a brief appearance at the closing ceremony, along with the other three teams who did not qualify.[1]

The Balls of Chaos returned and participated in the Marble League 2018 Qualifiers and were seeded in Group C. The team went on to perform exceptionally in the qualifiers, starting strong with a third-place finish in Curling. In the next event, the Snow Race, Anarchy came in second following a peculiar incident that made them, along with all other marbles who competed in the group, unable to finish the race. The team secured their qualification for Marble League 2018 with a second-place finish for Tumult in the 5 Meter Ice Dash, and remained at the top of their group with 25 points at the end of the qualifiers.

Regrettably, the Balls of Chaos' qualifiers came with controversy. During the Curling event, the team were tied in their semi-final match against Team Primary. However, Imar was found to be the closest to the button thanks to a blunder by Snarl, resulting in Team Primary advancing to the final. Following that, several angry Balls of Chaos fans tried to storm the arena. This led to scuffles between fans of both teams, and other spectators got involved too. This incident kickstarted the fierce rivalry between the Balls of Chaos and Team Primary.

The rivalry continued in the final event of the qualifiers, Halfpipe. In the final heat of Group C, the Balls of Chaos were once again paired with Team Primary. Following bumps from members of both teams on the course, the Balls of Chaos won the heat with the total time of 38.59 against Team Primary's 37.92, resulting in Team Primary missing out on the main tournament. At the end of the event, both teams got into a fight, while their respective supporters once again started rioting on the stands. Security marbles jumped in to control the situation and break up the fights.

The Balls of Chaos had a great start to Marble League 2018, with Tumult finishing fifth in the 5 Meter Ice Dash. The team proceeded to become the first team to win two consecutive gold medals, which they did in the next two events. Anarchy also set a Marble League Record in Event 2, the Ski Jump. The team rose to first in the standings after another gold in the Halfpipe event, and stayed in first even after finishing in 15th in the next event, the Bobsled.

The return of their rivals, Team Primary, in the form of Team Momary, threw the Balls of Chaos off. The team proceeded to finish within the bottom half for the next three events, and they fell to fifth. Anarchy managed to turn it around by winning a silver medal in Event 8, the Snowboard Cross, moving the team back to second overall. But another run of three bottom half finishes took them out of the top three again. After the Ice Hockey event, which marked Disarray's debut for the Balls of Chaos as reserve member, the team dropped to seventh overall, their lowest position in the season.

The Balls of Chaos decided to have Tumult participate in the final event, the Sand Mogul Race. Using their experience from the 5 Meter Ice Dash event in both the qualifiers and the main tournament, Tumult managed to win the team a bronze medal. This made the team conclude Marble League 2018 in fifth overall, which was their best result ever in the Marble League, leaving the team proud of their accomplishments.

The Balls of Chaos also participated in two offseason events. Tumult impressed the audience by coming 10th in the 100 Meter Water Race, but the team faltered in the Amazing Maze Marble Race, finishing 18th.[1]

In 2019 the team made Anarchy the team captain. Even with their failure at the Amazing Maze Marble Race, expectations were high for the Balls of Chaos going into the Marble League 2019 Qualifiers. They managed to keep up with that with a second-place finish for Clutter in the Funnel Race and a third-place finish in the Relay Race. Their two sub-par finishes notwithstanding, the team finished in 7th, qualifying for Marble League 2019. Harmony joined as their coach after the Qualifiers.

Marble League 2019 turned out to be a rough ride for the Balls of Chaos. Snarl was eliminated in the heats of Event 1, the Underwater Race, and finished 12th. The team jumped to eighth following a fourth-place finish for Anarchy in Event 2, the Funnel Race. Unfortunately, the team couldn't find the momentum and fell to the bottom half of the standings after Event 3, Balancing, and stayed there for the rest of the season, with only three top half finishes in the next eleven events. This included 7th place finish for Anarchy in the Summer Biathlon and a 13th place finish in the Elimination Race. As of Event 14, Surfing, the team were in 15th overall.

However, the Balls of Chaos started to turn things around in the final two events. In Event 15, Collision, the team managed to win a silver medal, beating the Raspberry Racers in the quarterfinals, and overcoming the Chocolatiers in the semifinals, before losing to the O'rangers in the final. This made the team rise to 12th. They followed this up with Tumult winning the final event, the Sand Rally. The team ended the tournament in 9th overall, better than they could have imagined after such a poor start.

As the Balls of Chaos prepared for the Marble League 2020 Qualifiers, the team received a letter from the JMRC. The letter turned out to be an invitation to take part in Marbula One Season 1. The team accepted and sent Anarchy and Clutter to represent them.[1] 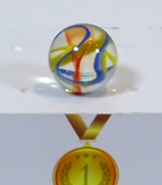 Anarchy after winning a gold medal in the Ski Jump (2018) 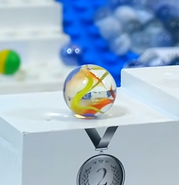 Anarchy after winning a silver medal in the Snowboard Cross (2018) 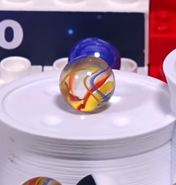 Anarchy after winning a silver medal in the Long Jump (2020)